When SIG announced a 10 mm variant of their .45ACP P220 pistol, caliber hipsters everywhere rejoiced. They finally had a modern, all-metal platform to launch their favorite punishing pistol caliber. Despite its sparse popularity today, what few makers do feature the rimless magnum caliber read like a who’s who of the firearms industry.

Colt with their Delta Elite enjoys a cult-following, pairing the most popular handgun in American history with the hard-hitting cartridge, and Glock with their model 20 offer a modern striker-fired, polymer handgun in the round. Shooters looking for a modern, all-steel weapon in this caliber were out of luck until SIG’s recent announcement. But how does the double, single-action Swiss pistol pair with the hard-hitting all-American 10mm round? 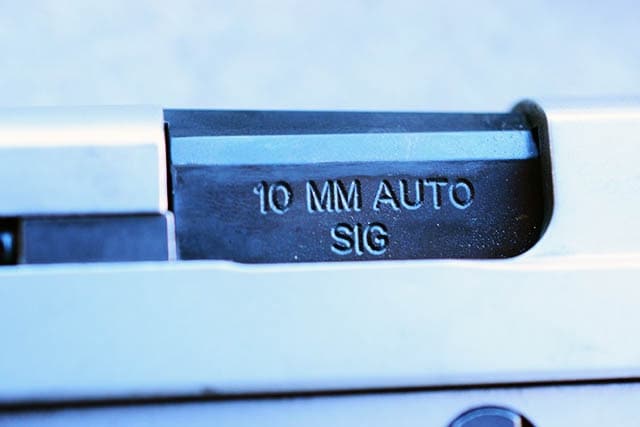 I say this not because I doubt the platform, but as someone who has fired a Glock 20 with full-powered 10mm rounds, I’m intimately familiar with the round’s punishing recoil. The new SIG P220 10mm, features stainless steel construction and the same ultra-reliable SIG operating method as all their P220 series handguns.

Although I was only able to fire roughly 50 rounds through the new gun, the recoil was impressively mild. Which is especially incredible because the ammo used was full-powered, defense rounds. These same cartridges normally cause most shooters to give up after a single magazine.

Offering shooters eight plus one rounds of fight-stopping 10mm in a pistol that tames the recoil to .40S&W levels, SIG knocked one out of the park with their new P220. Plus, it can double as a hog-hunting pistol or great backup to a hunting rifle when stalking dangerous prey.

The P220 10mm retails for $1400, and will likely hit stores sometime this year, but no official release date was announced yet.