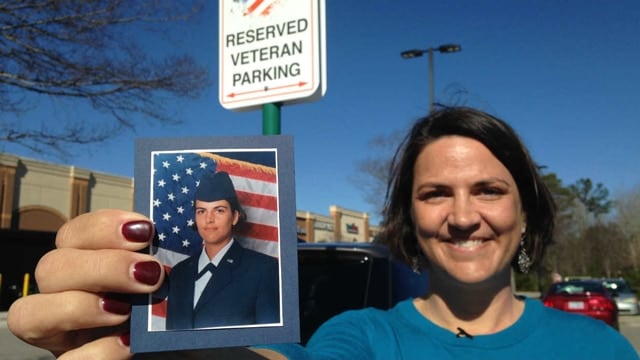 When Air Force veteran Mary Claire Caine returned to her car outside of a Wilmington, North Carolina, Harris Teeter during a recent trip to grab some groceries, she was shocked to find a note left on her car which questioned her decision to use the parking space reserved for veterans. But what’s more, the note was penned by a fellow veteran.

“Maybe [you] can’t read the sign you parked in front of. This space is reserved for those who fought for America….not you. Thanks, Wounded Vet,” were the harsh words written in black Sharpie on the inside piece of a torn envelope.

“The first thing I felt was confusion that there was a mistake, and that I had to talk to this person and ask them why they were so quick to assume I wasn’t a veteran and that I was taking privileges that didn’t belong to me,” said Caine, who served in Kuwait.

“For a split second I thought, ‘Am I a worthy enough veteran to park in this spot?’ And, then I got very angry at myself for even considering that,” Caine said.

Caine believes that the person behind the pen likely assumed she wasn’t a veteran because she is female.

“They have this image of what today’s American veteran is and honestly if you’ve served in the United States military, you know that veterans come in all shapes and sizes. I question whether the person who left the note was fully aware of that,” she said.

Caine said she was first tempted to just toss the note in the trashcan, but she didn’t.

“I want them to know they owe me and every other female service member who’s fighting now and who’s fought in the past, an apology for jumping to conclusions,” Caine said. “It’s true what the soldiers missing in action slogan is: ‘All gave some and some gave all.’ And, I think that’s very important that sacrifice is sacrifice and I earned the title as a veteran and I’m proud of that.”