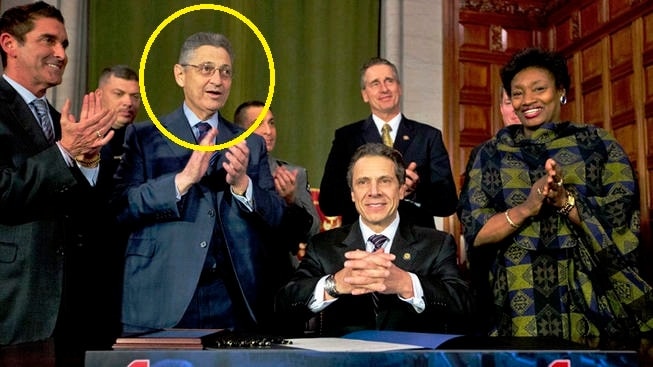 The Federal Bureau of Investigation arrested New York Assembly Speaker Sheldon Silver, long a driving force behind the adoption of gun control legislation, Thursday on charges of taking $4 million in bribes and kickbacks since 2000.

“Over his decades in office, Speaker Silver has amassed titanic political power,” U.S. Attorney Preet Bharara said in a statement following the lawmaker’s arrest. “But, as alleged, during that same time, Silver also amassed a tremendous personal fortune – through the abuse of that political power. All told, we allege that Silver corruptly collected some $4 million in bribes and kickbacks disguised as ‘referral fees.’ Those disguised bribes and kickbacks account for approximately two-thirds of all of Silver’s outside income since 2002.”

According to court documents unsealed Thursday, agents from the FBI allege that Silver collected kickbacks for helping to arrange real estate deals in Manhattan that included using his position to enhance. Further allegations include arranging state grants and funds to a physician who in turn referred lucrative patients to Silver’s law firm. Federal investigators contend Silver collected over $6 million from the firm for which he never actually performed any legal work, largely for asbestos filings.

“Politicians are supposed to be on the people’s payroll, not on secret retainer to wealthy special interests they do favors for,” Bharara said. “These charges go to the very core of what ails Albany – a lack of transparency, lack of accountability, and lack of principle joined with an overabundance of greed, cronyism, and self-dealing.”

One of the most chilling allegations made by the government is that Silver ran a smokescreen to hide his actions from the anti-corruption Moreland Commission, first fending off multiple subpoenas from the group for nine months then finally convincing political ally Gov. Andrew Cuomo to shut down the state-financed commission last spring. Following the panel’s decommission, the state attorney general’s office withdrew the subpoenas.

Bharara, who has inherited the now-disbanded Moreland files, is promising that more investigations are forthcoming.

“We will keep at it, because the men and woman of the FBI and of my office still subscribe to the quaint view that no one is above the law, no matter who you are, or who know, or how much money you have,” he said in a press conference Thursday. “And so our unfinished fight against public corruption continues. You should stay tuned.”

Silver, for his part, was arraigned in Manhattan Thursday afternoon in front of U.S. Magistrate Judge Frank Maas, then released on $200,000 bond.

The veteran attorney and lawmaker maintains his innocence, telling reporters briefly upon his release, ““I am confident that after a full hearing that I will be vindicated of these charges.”

New York City Mayor Bill De Blasio (D) told the NY Daily News that Silver should not resign his position in the Assembly. “Although the charges announced today are certainly very serious, I want to note that I’ve always known Shelly Silver to be a man of integrity,” he said.

This is not the first time in recent months that a long-term state lawmaker who was tough on guns found themselves on the wrong side of a federal corruption investigation.

Last March, California state Sen. Leland Yee was charged with six counts of scheming to defraud citizens of honest services, conspiracy to deal firearms without a license and to illegally import firearms. At the time of his arrest, Yee was a front-runner for California Secretary of State.

The five counts arrayed against Silver each carry a maximum of 20 years in federal prison, leading to the possibility of a century-long sentence if convicted.

Silver entered the Assembly in 1976, winning the 65th District which comprises lower Manhattan to include the site of the World Trade Center. As Speaker since 1994, Silver largely charted the course of legislation in the lower chamber of the New York state legislature for the past two decades. This included introducing the controversial gun control measure, the Secure Ammunition and Firearms Enforcement Act of 2013, to the Assembly and helping to rush it through in record time.