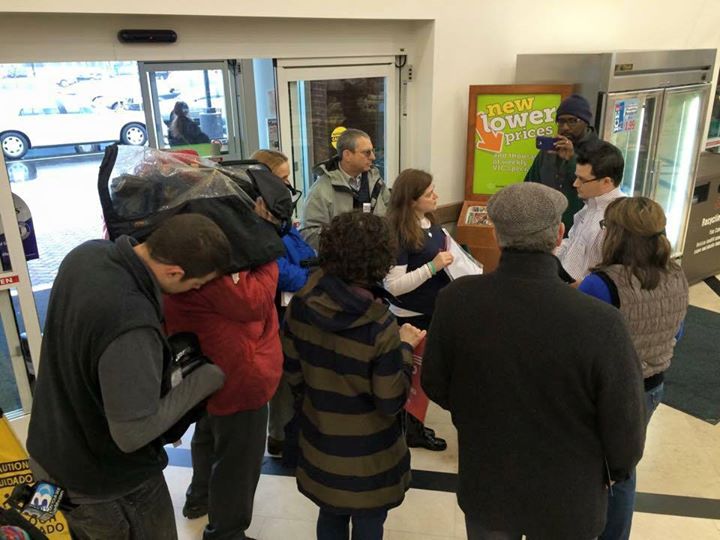 As the struggle between Moms Demand Action and Kroger’s grocery chain approaches its sixth month, the group publicly cut up loyalty cards at Kroger subsidiary Harris Teeter stores in Charlotte on  Saturday.

“All I should be worried about during my Super Bowl shopping is whether or not there will be any salsa left at the store, but shopping at Harris Teeter means I also need to worry about my safety,” Christy Clark, from the North Carolina chapter of MDA, told WSOC.

“Instead of protecting its customers, Kroger and Harris Teeter are asking moms and families to decide whether somebody with a gun in the store is an individual just making a political statement or a criminal. I’ll be doing my Super Bowl shopping at a store with gun sense,” she said.

Representatives for Harris Teeter met briefly with the small delegation from the Mom’s group and listened to its presentation, however, the grocery store chain stated that its policy is clear.

“We have and will continue to adhere to the firearms and concealed handgun laws as outlined by the states in which we do business,” read a statement released by the chain following the event. “We believe this issue is best handled by lawmakers, not retailers.”

MDA has been locked in a protracted six-month battle with Kroger over open carry that has seen attack ads, a Bloomberg-funded survey of Kroger shoppers and protest rallies at the company’s annual investors’ meeting.

Gun rights advocates in the Tar Heel State were not impressed with MDAs efforts.

“A small number of anti-gun activists, most of whom are staffers paid by Michael Bloomberg, are attempting to create the appearance of a grass roots movement,” explained Paul Valone, President of Grass Roots North Carolina, a state pro-gun group, to Guns.com. “The political term of art for such phony grass roots organizations is ‘astroturf.’ In fact, Moms Demand Action is not even a chartered organization.”

Valone stressed that the actions of the grocer should be as expected by the group.

“That Harris Teeter and its parent company, Kroger, are unresponsive to Bloomberg’s demands doesn’t surprise us; both stores have already waded into the gun debate and found the water not to their liking,” said Valone. “Kroger posted its North Carolina stores against concealed carry after we passed our concealed handgun law in 1995. In response, the Grass Roots North Carolina (GRNC) Don’t Buy List directed thousands of contacts to their corporate headquarters, after which they quickly removed the signs.”

Kroger is the largest grocery chain in the country, in addition to Harris Teeter’s 212 stores that it acquired in 2013, Kroger also owns Ralphs, Fry’s, King Soopers and Fred Meyers. Many of these have also been targeted by the Moms for protests in recent months.