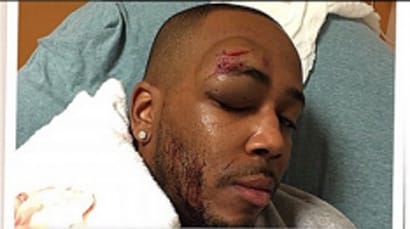 A brutal home invasion and robbery in Houston Tuesday night came to an abrupt end when one of the victims, after being beaten by the suspects, was able to slip away and grab a gun from his car.

Tai Carr, a local rapper known as Doughbeezy, was one of several victims who were assaulted during the attempted robbery outside of a friend’s home, a local Fox affiliate reported. But during the robbery, Carr’s friend, Dwan Banks, returned home and pulled into the driveway with her children. Banks saw the men fighting in front of her home, but was unaware of what was happening at the time.

Carr yelled at Banks that they were being robbed and to leave, but at that point it was too late.

The suspects, one of whom Banks recognized as a former friend of her son, then forced Carr, the other victims, who have not been named, as well as Banks and her children into the house.

“Don’t let them hurt my kids,” Banks told The Houston Chronicle was her only thought.

Banks said she tried to remain calm during the ordeal, hoping it would help her younger child to not be frightened.

Once inside the home, while the suspects were dealing with the other victims, Carr was able to slip away unnoticed and grab a handgun from trunk of his vehicle. Carr then went back inside the home and shot one of the suspects, causing the second suspect to flee.

Banks said the injured victim, who died from the gunshot wound, laid there for a minute, but “it was over instantly.”

Police found the second suspect, 23-year-old Marquez Romero Heckard, hiding in the bathroom of a nearby Wendy’s restaurant. He was still in possession of the gun used during the robbery when authorities found him.

Banks said she’ll be moving very soon, and Carr is just happy to be alive to see his baby girl – due next week – take her first breath.