“This once proud organization that was a force for good has relegated itself into irrelevancy, and I challenge anybody to name the last significant accomplishment that the NAACP has achieved in the United States for people of color,” Clarke said during an interview with Fox & Friends. “This organization has become nothing more than a political propaganda entity for the left.”

Clarke, who has become a prominent figure in the gun world, urged the organization to “stay off the police” and lead a more meaningful discussion, namely why these incidents are happening and what can be done to prevent them.

“The number one cause of this is father-absent homes,” Clarke said. “So what are we going to do in terms of having more effective parenting, more role modeling, more engaged fathers in the lives of these young black men so that we don’t have this behavior.” 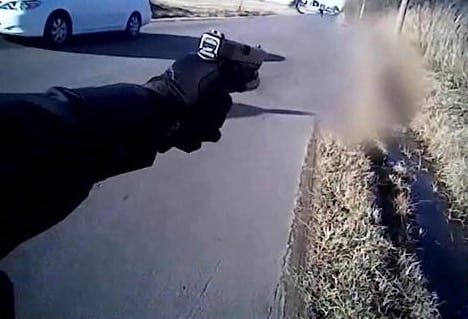 The officer’s body cam shows him shooting the suspect in the back, but David Clarke said there’s more to it than that. (Photo: ABC)

He also pointed out there there was much more going on with the situation involving the Muskogee officer than just the 20-second video clip, which appears to show the officer shooting the man in the back while running away, that has been making its way around the Internet.

Clarke explained that Walker had repeatedly stalked and threatened his ex-girlfriend and on the day of the shooting, he waited for her outside of a church during a wedding. The pastor of the church finally called the police when the harassment escalated.

When the responding officer arrived, he asked to pat down Walker, for his own safety, after such time the suspect fled and the incident intensified. Before Walker was shot, he reached for something and turned back towards the officer before turning back around and continuing to flee.

A loaded handgun was found next to Walker after he was shot.

“When you run from the police, I’ll tell you right now, you’re headed toward a very dark place where things are not going to go well for you,” Clarke added. “That doesn’t mean that you’re automatically going to be shot and you should die. But the fact is, that is one of the most dangerous situations an officer can be involved in.”

Clarke said the loss of Walker’s life was “unfortunate,” but reiterated that the focus needs to be “on the behavior of our young black men, and not the police.”