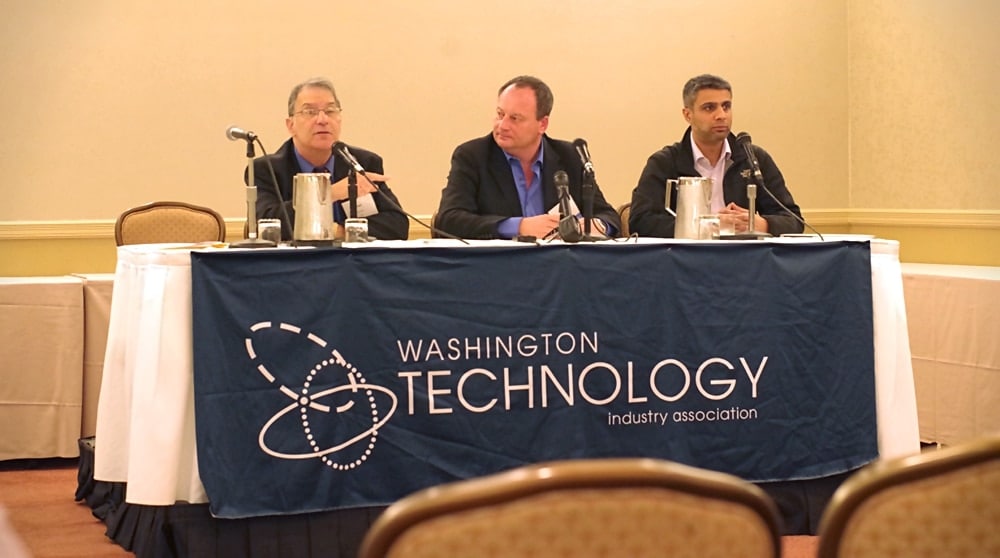 In the gun industry smart gun tech is cutting-edge gear that makes shooters better, more accurate or safer. In political circles it has become synonymous with “gun safety,” the new face of gun control. In the technology sector, smart gun tech means new opportunities. When Guns.com attended the inaugural Seattle Smart Gun symposium on Wednesday, we expected to see a blend of all three, and we did. What we didn’t see was a balance in the mix.

Missing from the panelists were any gun rights representatives, a tricky feat to accomplish at a symposium just a 15 minute drive from the Second Amendment Foundation and the Citizens Committee for the Right to Keep and Bear Arms. 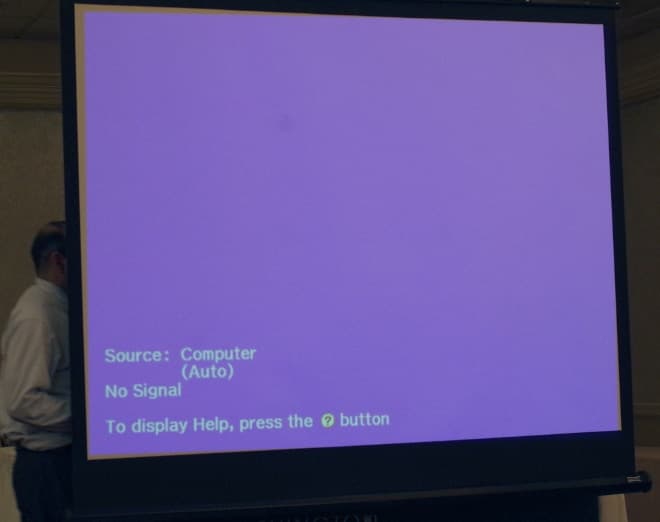 The symposium’s projector system was a no-go for the duration of the event. (Photo: Max Slowik)

Three panelists, Robert McNamara, co-founder of TriggerSmart, Alan Boinus, CEO of Allied Biometrix and Omer Kiyani, founder of Sentinl were there to talk about actual smart gun technology. Each panelist was there to speak to their vision of what smart gun tech may one day be.

The idea is to use electronic locking systems to prevent unauthorized users from operating firearms they don’t have clearance for. Right now, smart gun tech as we know it is still in the proof-of-concept stage. The tech panelists were each working on fundamentally different approaches to develop these gun locks, each with their strengths and weaknesses.

None of these early systems were foolproof and all acknowledged this. That’s the point of the symposium, after all, from their perspective. The tech trio is looking for testing and investment, albeit independently from each others’ projects.

We’ve known about the TriggerSmart system for a few years now. It’s a mechanical lock that automatically retracts in the presence of an RFID key. TriggerSmart is a retrofit system and the working prototype – back in Ireland, McNamara’s birthplace – replaces the grip panels of a pistol.

From the underside of the grip the TriggerSmart system can physically block the trigger from being pulled. A straight-forward design, the system can be adapted to work with popular platforms.

The Allied Biometrix system, marketed by Alan Boinus and a product of the New Jersey Institute of Technology, has been in development for years with the long encouragement of Weinberg. According to Boinus, about 50 prototypes have been made.

Instead of using a key, the Allied Biometrix system is a grip detector, that, in theory, can identify a user by their mostly-unique grip style through a network of sensors. Because this doesn’t use a key, Boinus explained, it cannot be spoofed and should work even with gloved hands, but it’s not completely accurate.

The Sentinl is not a smart gun at all, and in a twist, may be the most marketable of the three technologies. Kiyani has developed a smart trigger lock. It’s on its way to early production and combines elements of smart locks without requiring any modification to any guns to work.

Sentinl is just a lock that clamps around a pistol. In order to unlock it, authorized users swipe a finger across the fingerprint reader and if there’s a match, the lock pops open. In the event of a failure to read, it unlocks with a key like any other trigger lock or small gun safe.

All three systems are untested. We know that there are significant hurdles for these technologies, both in their current states of execution as well as with fundamental realities that frame these approaches to smart gun systems.

One problem with retrofit systems is that they’re modular and not integral to the gun. That means they can be de-retrofit. They aren’t critical to the function of the host gun and can be disabled with a parts swap.

Even if a parts swap were not possible, these systems have a high failure potential. RFID is weak security, being radio-based. Radio signals can be copied and spoofed, not to mention jammed. You can’t call it real smart gun tech if it can be confused. Biometrics are tempting, but currently the Biometrix grips have a mean time between failure of about 1 in 1,000. While that seems to some as a decent success rate, in terms of firearms reliability that’s wholly unacceptable.

From a policy perspective, these aren’t solutions, they’re the smoking gun against a smart gun mandate.

And that brings us to the crux of the Smart Gun Symposium. Mandate. Almost everyone involved steered very clear from any political action that might, in the slightest, indicate that the purpose for developing these technologies was tied to any form of gun control.

Advocating for mandate would shut all of this down today, and that’s partially why the panelists were opposed to any talk of it for the bulk of the symposium.

A smart gun tech mandate is bad for everyone all-around. It’s a straight-forward attack on gun rights, restricting gun sales and increasing the costs of gun ownership. The backlash would hamper the course of smart gun development, which is not inherently bad and shows promise in many ways, and ultimately a mandate would guarantee that the bottom-dollar “smart” gun technology would be the ceiling for free-market innovation. For these reasons none of the smart gun tech developers want — or even want to discuss — a gun mandate.

No one wants to see guns fall into the wrong hands. It’s possible that electronic locking systems will help combat the unintentional or intentional misuse of firearms. Morally, we as gun rights supporters must examine the state of smart gun technology and how it’s being applied.

Smart gun technology can be used for good. Omer Kiyani, inventor of the Sentinl, isn’t looking for a way to restrict gun ownership. A gun owner and a parent, he knows that some children have an abundance of curiosity that exceeds their self-control. A smart trigger lock means that parents have the option of leaving a loaded gun on their nightstand knowing that their kids don’t have real access to it.

It’s not a perfect solution, but from a gun rights perspective, it’s not a compromise. It’s a choice for consumers and parents to make and Kiyani is refusing to take any money from political organizations to work on his lock. He’ll see it through one way or another.

That’s not the case for all smart gun tech, as it’s also clear that there’s money in the pot for the taking here. And that’s a fraction of what’s for grabs if there were a mandate on the horizon.

It’s foolish to think that none of our hosts at the Smart Gun Symposium are not looking for a new approach to gun control. “It only makes sense for the government to consider a smart gun mandate,” said Juliet Leftwich, speaking for her panel. And she’s not alone.

“Obviously we’d rather not have anyone own a gun,” said Michael Shutzler, WTIA CEO. “But if they are going to own a gun it might as well be a smart gun.”

After the symposium I had dinner with Alan Gottlieb of the Second Amendment Foundation. I asked him, “They’re making an end-run around Heller, aren’t they?”

He looked down at the table and he nodded yes. I couldn’t see if his eyes were open or closed.