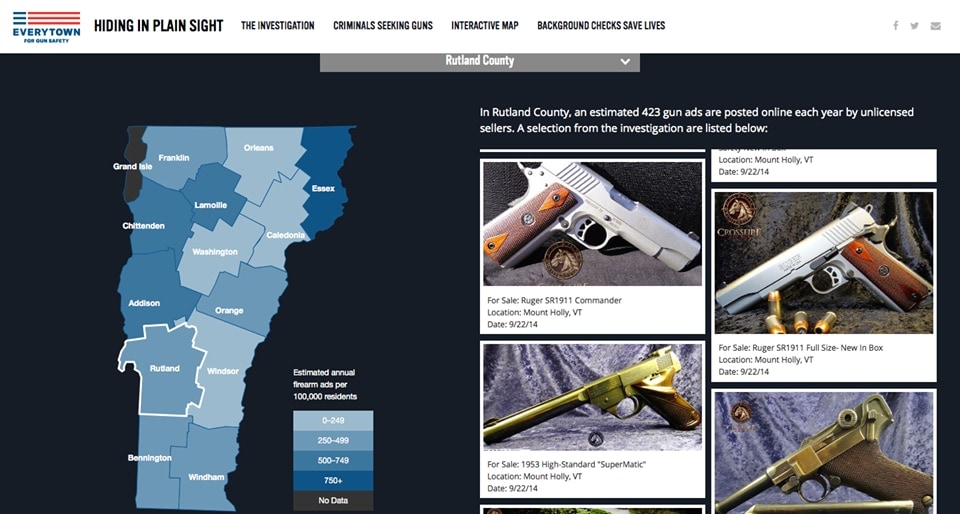 As part of an investigation into online gun sales in Vermont, Michael Bloomberg’s Everytown group used a series of photos from a real gun shop, which now is threatening a lawsuit.

The photos at the heart of the controversy were used by the organization as part of their 20-page Hiding in Plain Sight report. It involved both cataloging listed auctions by private sellers through Armslist, an online classified service, then setting up a series of dummy transactions by the group to try to ascertain who was buying. The problem is, several of the images used  belonged to a local gun shop, Crossfire Arms of Mount Holly, Vermont, and the Federal Firearms License holder is not pleased.

“Late last night it was brought to our attention that our watermarked photographs were used in their marketing propaganda, not only without our consent or knowledge, but in a false and malicious manner that clearly misrepresented and maligned our company,” said the store’s owner, Bobby Richard, in a statement. “Everytown, stole these photographs from Armslist Dealer listings and posted them as firearms being sold by ‘Unlicensed Sellers.'”

Crossfire has been speaking out about the alleged theft to outlets ranging from Buzzfeed to Bearing Arms, feels that the gun control group is damaging their professional reputation, and is in contact with legal counsel over the incident.

“We are in good standing with the ATF and in point of fact, perform the necessary NICS background checks with all transactions as prescribed by law. We feel that Everytown, in its haste to force feed the American Public it’s propaganda, knowingly and willfully ignored relevant information with complete disregard for the consequences,” Richards said.

For their part, Everytown contends that there was a mistake made, and they have corrected their report.

“A previous version of this report incorrectly stated that we identified 1,106 ads posted by unlicensed Vermont sellers offering firearms for sale,” reads a statement emailed to Guns.com from the group. “We inadvertently included 49 ads posted by licensed dealers in Vermont in this total. This version of the report reflects data based on the updated total of 1,058 gun ads posted by unlicensed sellers, which yields an estimate of 2,926 unlicensed gun sales annually on just three websites in Vermont, including 121 gun sales to felons and domestic abusers.”

This is not the first controversial report delivered by Everytown in their 10-month existence.

A June 2014 report on accidental shootings rates drew fire from Dr. John Lott, President of the Crime Prevention Research Center, who contended that it was misleading, inaccurate and its focus too broad.

Likewise an Everytown report released at the same time claiming 74 school shootings had occurred since Newtown was panned by journalists for its inclusion of accidental shootings, drug-related shootings, gang-related shootings, and suicides. Politfact looked into the report’s methodology and declared the figures quoted, “mostly false.”

An updated school shootings report released last month included at least one incident that, following cursory fact checking by Guns.com, did not occur, leading Everytown to update their data.

Those inside the firearms industry are not surprised by this week’s news from Vermont.

“It is just the latest in a series of factual gaffes, like calling one of the Boston Marathon bombers a victim of gun violence when he was justifiably killed by law enforcement during his rampage. Everytown’s anti-gun bias blinds them to the real facts and calls in to question the legitimacy of all their so-called studies,” said Keane.