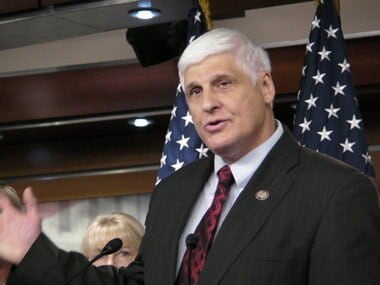 Republican lawmakers in both chambers of Congress introduced legislation to mandate the U.S. Army Corps of Engineers allow concealed carry on the 17 million acres under its control.

The Recreational Lands Self-Defense Act, as its termed, would allow otherwise lawful permit holders to carry their guns in the outdoor recreation areas run by the Corps.

“Under current law, an individual may possess a functional firearm at a national park or wildlife refuge system with the exception that they are not previously prohibited from possessing a firearm or breaking State laws,” said Rep. Bob Gibbs, R-Ohio, the House sponsor, in a statement obtained by Guns.com.

“However, the U.S. Army Corps of Engineers has not honored State-issued concealed weapon permits at their facilities, leaving Americans unable to exercise their Second Amendment rights while they camp or hunt on their land. This bill will ensure that federal facilities remain safe while returning the right to gun owners when they are legally camping, hunting, and fishing on Army Corps property,” Gibbs said.

The two companion bills, Gibbs’s H.R. 578 and Sen. Mike Crapo’s, R-Idaho, S. 263, would mandate that the Corps recognize local concealed carry permits and on their 7.6 million acres of land and 4.1 million acres of water recreation area. In all this includes over 400 lakes and river projects, 90,000 campsites and 4,000 miles of trails. Certain areas deemed essential to National Security, for example Corps Headquarters, would be exempt.

The legislation comes just months after a federal judge in Idaho found that the Corps’ practice of not allowing lawful carry of firearms on land controlled by the agency is in violation of the Second Amendment. In that case, plaintiffs filed suit in 2013 after they wrote to the Corps commander for the area to obtain permission to carry a functional firearm on recreational land they intended to visit and did not receive a reply.

Under Corps rules, private carry of guns either concealed, in vehicles, or inside temporary structures such as tents on water project areas is prohibited unless the district commander gives explicit permission. Denied their right to self-defense, the two filed suit seeking a halt to the practice.

That case, however, is at odds with one filed by a man over the right to carry his handgun at a Corps campground in Georgia where he frequently takes his family for weekend getaways. It was rejected only days before the Idaho suit was heard in court.

The measures in Congress have the support of the National Rifle Association and are part of the larger Sportsmen’s Heritage and Recreational Enhancement Act package to be reviewed this session.