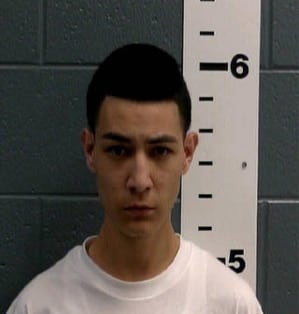 Justin Clark, now 22, when he was arrested by on burglary charges.

An Albuquerque federal court sentenced a man to 63 months in federal prison for violating federal firearms laws, including unlawful possession of a machine gun with an obliterated serial number and silencer.

Justin E. Clark, 22, of Las Cruces, pled guilty in September 2014 to a two-count felony charge of being a drug addict in possession of a firearm, and unlawfully possessing a machine gun.

He admitted to investigators that he bought the automatic weapon illegally when he was addicted to crack cocaine.

Clark was arrested in April 2014 on a criminal complaint charging him with distribution of a controlled substance and the aforementioned gun charges, and he’s been in federal custody since.

However, Doña Ana County Sheriff’s deputies arrested Clark, along with his mother and brother, in March 2014 on burglary charges.

After completing his term of incarceration on federal charges, Clark will be on supervised release for three years.