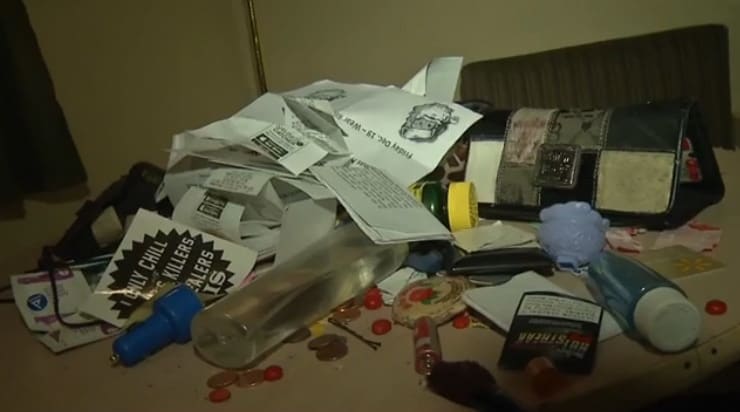 The child’s father said they were getting ready to order pizza when the boy got into his mother’s purse. (Photo: KOB)

A mother and father are both recovering from a gunshot wound following an accident involving a toddler in an Albuquerque hotel room Saturday afternoon.

The 3-year-old was apparently getting into his mother’s purse to retrieve an iPod, when he discovered a loaded 9mm handgun and pulled the trigger, striking both parents with a single bullet.

“It was like if I was to get up, shake your hand and sat back down,” Justin Reynolds, the child’s father, told local media. “That’s how fast it happened. All of a sudden, we heard a gun go off, and the next minute I realized my girlfriend was bleeding. Then I sat down and realized I was shot, too.”

The mother, who is eight months pregnant, was struck in the shoulder, and Reynolds was struck in the buttocks. Reynolds immediately called 911 when he realized what had happened, and held towels on his girlfriend’s wound until paramedics arrived.

“I just took action right away,” Reynolds said. “I was more worried about my girlfriend than myself and anything else that was going on. And my son, because I didn’t know if he had shot himself or not. He was shocked and crying. It was traumatizing.”

Although scared, the toddler wasn’t injured and a 2-year-old child who was also present was unharmed.

The couple was transported to a local hospital, where Reynolds was released later that day, but as of Monday, the mother was still being held and was last listed in stable condition.

Albuquerque police spokesman Simon Drobik said once the investigation is completed, the case will go to the District Attorney’s Office to determine whether any charges will be filed against the parents, who could be facing felony criminal negligence. Meanwhile, the New Mexico Children, Youth and Families Department placed the couple’s two children on a 48-hour hold.

“The Albuquerque Police Department cannot emphasize enough that if you choose to be a gun owner ALWAYS secure and lock up your firearm out of the reach of children and adolescents,” Drobik said in a news release.