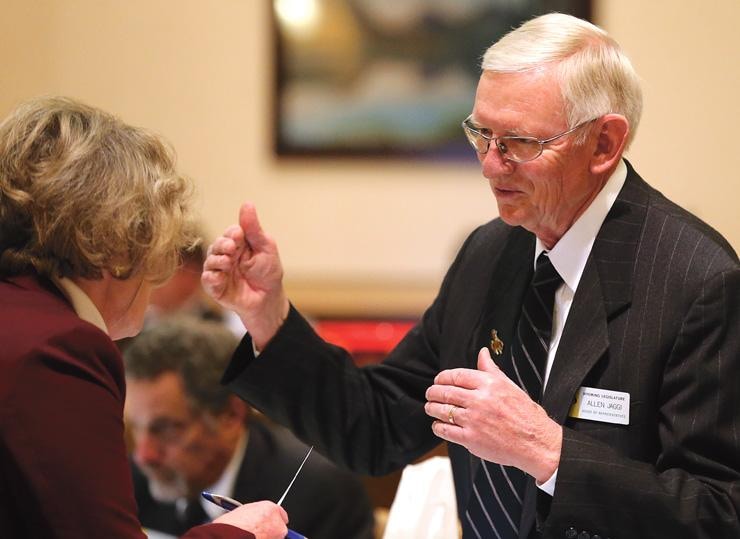 A measure to do away with gun free zones around both K-12 schools as well as colleges and universities sailed through the Wyoming House in a 42-17 vote Monday.

The bill would allow those with state-recognized concealed carry permits to bring their handgun with them while visiting or attending school events or classes.

Rep. Allen Jaggi, R-Lyman, the legislation’s sponsor, feels that gun free zones that prohibit concealed carry are public safety risks, saying, “No matter how many laws we have, the people who are there to do harm don’t care about our laws.”

Jaggi’s measure, House Bill 114, appropriately named the Wyoming Repeal Gun Free Zones Act, would forbid any ban of lawful concealed carry at any governmental meeting to include the state legislature, any public or professional sporting event, or any public school, college or university. The legislation keeps intact current bans on carry inside courtrooms and preserves the right for private property owners to set their own policy.

Educator association lobbyists do not feel that the legislation is a good idea.

“Our members who work in schools every day were profoundly impacted by the tragedies that occurred around the country in the past few years,” said Ken Decaria, who represents the Wyoming Education Association. “While they struggle to answer the question of how could this happen, most do not believe allowing guns in school is the answer.”

“Gun free zones only disarm law-abiding citizens and serve as an egregious infringement of an individual’s Second Amendment rights,” reads a statement on Wyoming’s bill issued by the National Rifle Association’s Institute for Legislative Action. “The House’s passage of HB 114 is a victory for gun owners in Wyoming and the first step towards restoring your fundamental right to self-defense, regardless of your location.”

Should the legislation become law, Wyoming would be the tenth state to implement laws to allow campus carry in one form or another. According to a study by the Crime Prevention Research Center, there have been no reported problems with permit holders in the nine states that mandate colleges allow permitted concealed handguns on campuses.

Following a shooting at Florida State University last year, a bill in the Sunshine State to allow carry on college campuses is gaining traction while a measure to bring the practice to Texas made headlines last week.

The Wyoming bill now heads to the Republican-controlled state Senate and, if it passes there without amendment, to the desk of Republican Gov. Matt Meade where signature is likely.