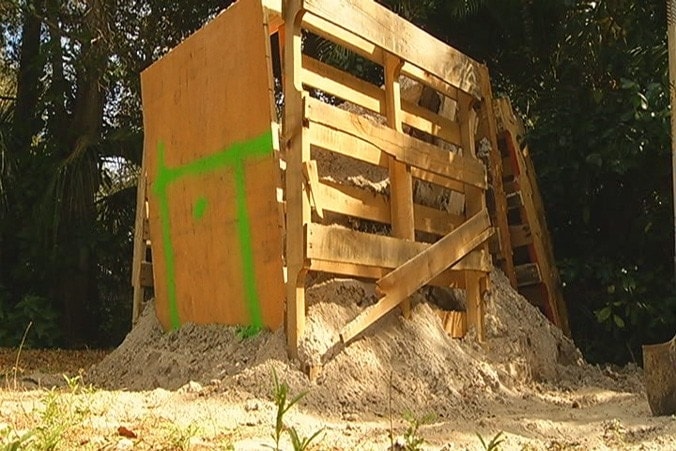 Joey Carannante’s homemade range, consisting of pallets and sand, is drawing complaints from his neighbors who are petitioning to have it removed. (Photo: Bay News 9)

Neighbors and local lawmakers in St. Petersburg are getting in line to protest a man’s private shooting range they claim is erected too close to children, a view supported by pro-gun advocates.

Joey Carannante, 21, took advantage of a law in the Sunshine State that is perceived to allow, with little regulation, shooting ranges in residential areas. After setting up his berm and target stands on his parent’s property, he quickly incurred the wrath of neighbors who contend that he is 50 feet or less from nearby homes where children play outside.

Even though his neighbors aren’t happy, Carrannate feels he complies with all local and state laws, a view supported by the St. Petersburg Police Department and the city attorney.

Nonetheless, as reported by the Tampa Bay Times, opponents to the range, which has not been fired into yet, are organizing. This effort includes a Change.org petition calling to prohibit private shooting ranges within 500 yards of a neighboring home. As of Wednesday, the petition has some 1,870 supporters, mainly from outside Florida.

State Rep. Darryl Rouson, D-St. Petersburg, is going so far as to try to prohibit future ranges with legislation.

“Right now there’s not a loophole in the state law,” said Rouson. “It’s a sinkhole.”

The problem is, according to gun rights advocates in the state, Carrannate’s range may already be in violation.

Hammer pointed out that state law Florida statue 790.15 (1), prohibits just such makeshift shooting ranges in areas such as Carrannate’s. She contends the real underlying problem  is that area lawmakers are simply not in compliance themselves, blaming preemption statutes that do not apply in this case.

The pro-gun Hammer added, “How anyone rational person could think that this makeshift shooting range is legal or safe is a mystery to me.”

Controversial home ranges are not a new story in Florida gun politics.

As for gun control groups, in yet another strange twist to this tale – blame the whole thing on Hammer.

“As long as National Rifle Association lobbyist Marion Hammer is happy, what does Florida care if the neighborhood kids are put in the line of fire?” posted the Coalition to Stop Gun Violence in reference to Carrannate’s planned range.

Carrannate currently plans to break in his range Saturday.