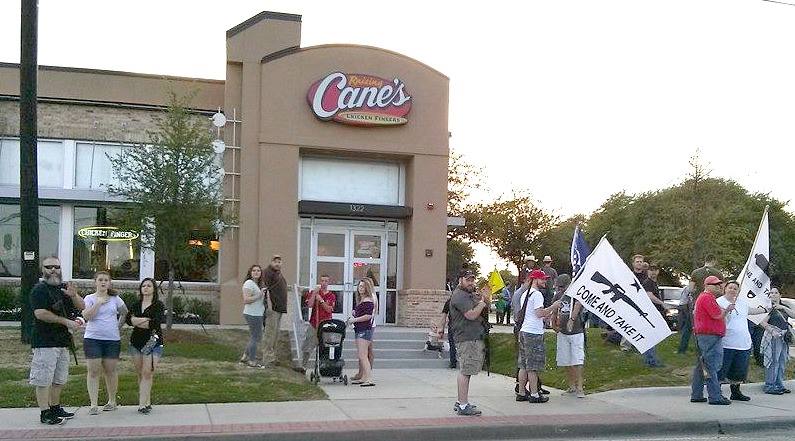 Moms Demand Action is setting its sights on chicken finger chain Raising Cane’s over its perceived policy on the open carry of firearms as seen in this 2014 photo. (Photo: Facebook)

The Bloomberg-backed Moms Demand Action group has kicked off a campaign against the open carry policies of Raising Cane’s, to which both the restaurant chain and open carry advocates are unimpressed.

The gun control group – who since last spring allied with former New York Mayor Michael Bloomberg’s Everytown for Gun Safety organization – has been locked in a protracted struggle with the Kroger grocery chain in an effort to change that chain’s policy on guns in their stores. Without gaining ground against Kroger, MDA has now set its sights on the fast-food restaurant group.

This week MDA has made public an ever-evolving series of posts to the organization’s Facebook account calling out the Baton Rouge-based chicken finger establishment over a series of photos posted by gun rights groups showing members openly carrying firearms at Raising Cane’s locations.

“Moms Demand Action’s social media campaign calls attention to how open carry extremists have patronized Raising Cane’s with long guns in tow over the past year,” wrote MDA Communications Director Erika Soto Lamb in an email to Guns.com. “Raising Cane’s claims to be a family-oriented restaurant specializing in chicken fingers, with over 200 stores in 18 states. We know this intimidating behavior is raising concerns for them as well. Moms are asking Raising Cane’s to prioritize customer and employee safety– and we hope the chain will follow the lead of other restaurants like Chipotle, Sonic and Jack in the Box that stood up to this extremist behavior and asked their customers to leave their firearms at home.”

However, the gun control groups targeted in the latest MDA campaign in which chicken fingers are taking collateral damage are downplaying the whole thing. Many of the images used by the Bloomberg group in their posts, as pointed out by Open Carry Texas, came from that group and others but are in fact several years old.

A Storify article tends to confirm that, while at least a few of the images date back to 2013, some are current.

Kory Watkins, head of Open Carry Tarrant County, another group whose images were used in the MDA blitz on Cane’s, downplayed the latest campaign as a baited distraction from getting pro-gun legislation passed in Texas. A distraction his group does not intend to take.

“We’re focused on the Senate, they can focus on Cane’s,” Watkins told Guns.com by phone Wednesday. “Cane’s is not making any new laws.”

In fact, the only thing the chain does seem to be making is chicken, and, like Kroger, has not announced any changes to its gun policies.

“At Raising Cane’s, our one love is quality chicken finger meals,” read a response posted Wednesday afternoon to the chain’s social media account. “It’s what we do. What we don’t do is get involved in political debates. We recognize that our customers and our crew have different political views and we respect those differences. We are chicken finger experts, not politicians.”