Catalog-subscribing gun owners get bombarded with new gizmos all the time and with marketing departments still belaboring the word “tactical”, sometimes it’s hard to see through the fog. Here are six new inventions that have recently blipped on my radar. I’m also passing judgement on their tacti-cool factor:

Today, while perusing FirearmsPro.com, I found a pretty cool tactical toy.  The Bug-A-Salt looks like a water gun, but in actuality it’s a battery-free, pump action salt gun.  The gun shoots ordinary table salt that can rip apart bugs.  Game on la cucarachas!

Note: The Bug-A-Salt could cause some serious eye damage—especially for the bugs.  Seriously though.  That’s why the package says adults only.  But, hey, who’s gonna let the kids play anyway when adults can have all the fun?

In my book, this is totally tacti-cool, but that just might be my sense of humor.

I can’t imagine too many people purchasing a tactical baby stroller.  The idea is definitely outside-the-box (and sure to ruffle some sensitive types) but when considering tactics and self defense, I do agree that you’ve got to consider everything.  For most people though, this is over-the-top.

Perhaps some mega millionaire with specific death threats to his or her children may opt to buy one, because, hey, what else do you buy with mega millions, right?  I can just picture some “executive protection specialist” having to push around a heavy stroller (those in the bodyguarding business tend to avoid the B-word).  Perhaps, a fake doll could turn the stroller into a type of bomb blanket or small arms fortress for adults, but forget about protection if someone begins lobbing rifle rounds at precious.

For most of us, myself included, this invention is a little tacti-dull.  Besides, I’m done changing diapers.

The Department of Defense has several entities, including DARPA, the Defense Advanced Research Projects Agency.  DARPA’s Extreme Accuracy Tasked Ordnance (EXACTO) claims to be the very first small-caliber guided bullet.  This means that snipers could use a .50 cal round at even greater distances.  This truly amazingly micro-technology will revolutionize rifle shooting and military sniping.

Suffice it to say, that is very tacti-cool. 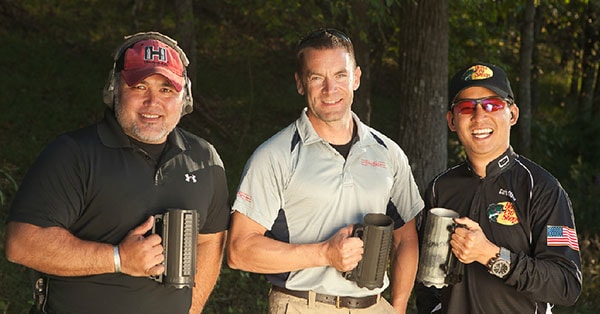 According to the battle mug website, a few Army buddies sat around and contemplated what they should do with the left over M4 carry handles.  Since a lot of gun guys and military guys like to both shoot and drink, it seemed natural that these veterans should develop an AR-type mug.

I really like this from their website: “Carry Handles are not included in the base price of Battle Mug.  We figure that most of you will have one or two laying around like we did.”  Of course, if you need a carry handle, they sell those too.

From a marketing standpoint, that’s ingenious, and from checking out their blog, these guys seem pretty dialed in too, to borrow military jargon.  Kudos to them.

Sharps Rifle Company has come up with a really awesome product to make AR bolts better.  They call it the Relia-Bolt.

The design of the Relia-Bolt allows the bolt to go into battery every time because of a patented camming action which guides the bolt past obstructions.  This promises to eliminate the common malfunction, the bolt to barrel extension jam. Like many new products, the first batch needed a tiny bit of tweaking (there was even a recall) but with some more heat treating, the Relia-Bolt is very attractive.  Besides, a pro shooter and friend of mine has been using the Relia-Bolt for a while and he loves it.

The Relia-Bolt is, hands-down, tacti-cool.

A buddy of mine who was on the first season of Top Shot suggested I add the hot selling 80 percent lowers and frames of ARs and 1911s to this list.

These parts are only 80 percent complete, and thus, they are not firearms according to ATF standards.  It’s perfectly legal as long as you don’t sell them or give them away.  Those who want to give it a try, buy a jig and go to work. For those of us who lack such skill (or interest), well, the lower or frame is just a hunk of metal.