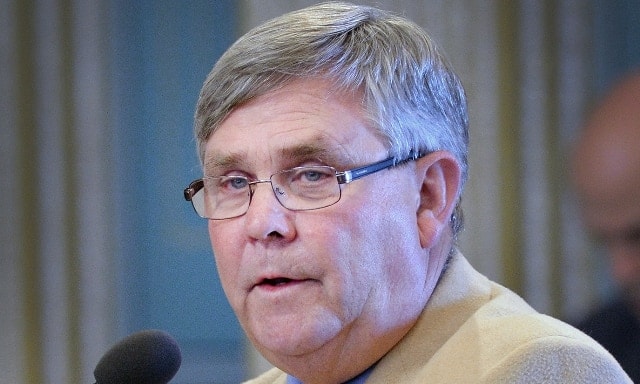 Sen. Mike Green, R-Mayville, has seen his legislation to do away with gun boards in Michigan approved by the state Senate…again. (Photo: WKAR.org)

As promised by state lawmakers, legislation that had been twice vetoed by Gov. Rick Snyder to do away with Michigan’s unique county gun boards for concealed carry permits is now halfway through the legislature.

The new measure, a two-bill package, does away with the gun boards by transferring most of their tasks to local county clerks and the state police while simultaneously reducing fees. Gone is controversial language addressing personal protection orders that doomed a broadly similar reform, which had garnered the opposition of gun control groups such as Moms Demand Action and Americans for Responsible Solutions.

Now, in its first legislative vote of the current session, the Republican dominated Senate approved the measure in a 28-9 vote after its easy trip through the Judiciary Committee last week.

“If you liked the bill before, you’ll definitely still like it, and you may like it even more because of the changes,” Sen. Mike Green, R-Mayville, the bill’s sponsor, told lawmakers.

Like the vetoed legislation, according to an analysis by the Senate Fiscal Agency, the bills would do away with the county gun boards, streamline the concealed carry permitting process, and reduce fees slightly, leaving the state with a true shall-issue practice.

However, even with the controversial language done away with, gun control groups are still opposing the measure.

“While we support efforts to make the licensing process more efficient, changes cannot come at the cost of public safety,” said Linda Brundage, with the Michigan Chapter of Moms Demand Action in a statement obtained by Guns.com. “This bill would take away important safeguards in Michigan law designed to keep guns out of dangerous hands. Law enforcement officials should continue to be able to keep dangerous people from carrying hidden, loaded guns in public. We urge our lawmakers to reject S.B. 34 and keep these important provisions in place.”

The legislation is now bound for the House where the Judiciary Committee will hear it on Feb. 10. If Governor Snyder ultimately signs the bill into law, gun boards could been a memory by the end of this year.