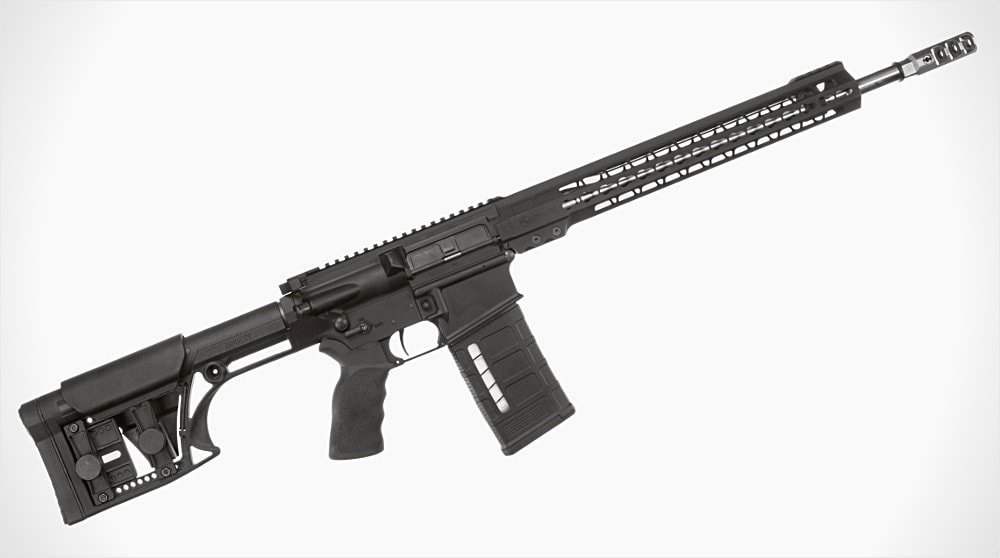 Armalite has launched nearly 20 new products for 2015 in a move to completely overhaul its product line. Not willing to fade into the crowd of AR manufacturers, Armalite has put together a catalog that separates them from the countless number of vanilla builders.

Armalite is literally synonymous with ARs and as AR standards change the company is keeping things current with new designs. Up first are the new 3-Gun rifles designed that skew towards competition use.

Make no mistake, these practical-tactical guns mean business and would be right at home for self-defense, duty and even hunting small and medium game. Armalite is kicking off the 3-Gun series with four models chambered for 5.56 and 7.62 NATO.

These 3-Gun rifles will be offered in two configurations for both calibers, with stainless steel barrels in 18- and 13.5-inch lengths. All are built with Armalite’s new tunable muzzle brake that, in the case of the 13.5-inch models, is pinned and welded into place to bring the overall muzzle length up to the necessary 16 inches.

All rifles in the 3-Gun series have free-floating handguards to promote accuracy and keep things running cool and feature adjustable gas blocks that allow shooters to tune their rifles optimally with specific loads.

The handguards are totally modern with KeyMod slots for accessories and a comfortable grip without needing rail covers or other slip-on protectors. Another KeyMod advantage is that it cuts weight and Armalite is taking that even further by opting for a minimalist design that eliminates most of the upper rail. The handguard has a short stretch of Picatinny rail at the end for front sights that doubles as thumb index for forward rifle stances.

The AR-10 models have 1-in-10-inch twist rates which is fairly standard for 7.62 rifles whereas the AR-15 models feature a 1-in-8-inch twist that will stabilize heavy hunting and long-range loads while still being able to shoot light target and varminter rounds. There’s a lot of variety when it comes to 5.56 loads but 1-in-8-inch is considered to be the most versatile — and currently most preferred — rifling rate.

The adjustable gas blocks are great for competition use where a tuned gas system can minimize felt recoil while maintaining reliability, especially with the shorter 13.5-inch barrels which are less forgiving when it comes to shooting a wide range of ammo types.

With the short uppers the 3-Gun rifles start at around 6.6 pounds in 5.56 NATO and with the long uppers they top out at 8.9 pounds in 7.62 NATO which puts them in the middleweight category across the board — not so light that rapid strings of fire will become an issue but not so heavy as to slow down shooters.

If the features stopped with the uppers these would still be compelling rifles for any shooter looking for a solid product off the shelf, but Armalite is completely kitting out the 3-Gun series to ensure that users get the complete package with these rifles.

Armalite is building these guns with single-stage Timney triggers at the factory set at 3 pounds, light enough for repeatable accuracy but not so light that it’s a liability when running and gunning. Armalite has outsourced from the best with these guns and is including Raptor Arms ambidextrous charging handles with every rifle.

Keeping the focus on competition use, Armalite selected Luth-AR fully-adjustable buttstocks for the 3-Gun series. These stocks have adjustable lengths of pull and combs for a tailor-fit cheek rest. About the only thing Armalite doesn’t include with the 3-Gun series are sights or optics and that’s fine. That would only increase the price for something that is guaranteed not to suit all shooters.

These are well-priced and attractive enough for the AR buyer who wants something a step up from the rest and who doesn’t want to get into the thick of building a rifle from components. But they’re just the tip of the iceberg as far as Armalite’s concerned for 2015. Armalite has a lot more new stuff coming and we’ll be sure to let you know as soon as they do.