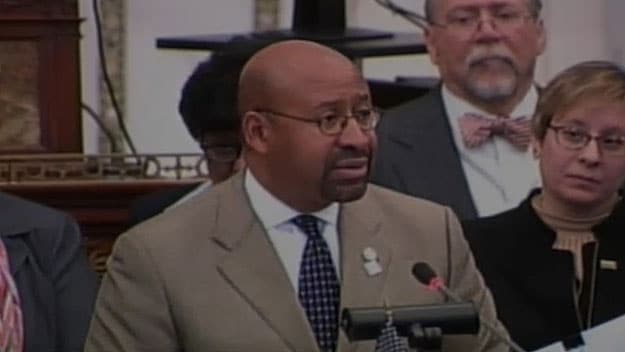 Philadelphia Mayor Michael Nutter is one of several facing the implications of lawsuits over local gun laws made illegal by NRA-backed Act 192. (Photo: City of Philadelphia)

Doylestown, Bethlehem, Allentown and Liberty, includes the list of dozens of cities across the Keystone State that are in the process of scrapping illegal laws to comply with an National Rifle Association-backed preemption measure.

The municipalities are scrambling due to Act 192, signed into law last year by Gov. Tom Corbett (R). As outlined in the language of the law, member groups such as the NRA can stand in for local citizens in challenging ordinances in court that exceed the state’s own gun laws.

The gun rights group at the time called the bill “the strongest firearms preemption statute in the country” and a “much-needed protection for gun owners in the Keystone State.”

In the scant weeks since its enactment, towns from one side of the state to the other have dusted off their laws and evaluated them for compliance.

In November, one of the first, West Mifflin, moved to roll back a 2009 ordinance that required lost or stolen handguns be reported within 72 hours. Doylestown Township did much the same with their own parks as did such rarely-mentioned locales as Castle Shannon, Duquesne and Liberty.

As reported by the Associated Press in January, at least 22 municipalities have already repealed their laws or indicated they intended to.

“The reality is the illegal ordinances in question do not make people safer,” said Chris W. Cox, executive director of the NRA’s Institute for Legislative Action in a statement. “They are simply tools to further the gun control agenda and infringe on the Second Amendment rights of law-abiding citizens in the Commonwealth of Pennsylvania.”

Its not just small towns that are conceding the fact.

This week alone, Allentown, the third largest city in the state, removed its ban on guns in parks and city property in addition to scuttling their stolen gun registry after the prospect of taking on Tea Party advocates in court.

More action is to come, with Bethlehem on the brink of repealing their $2 gun permit fee.

“Cities are unable to legislate the idea of carrying the firearm,” solicitor William Leeson told the Bethlehem City Council on Tuesday.

For those not making the move on their own, gun rights groups are making good their promise of stepping in with litigation, which, as outlined by Act 192, the cities would be liable to reimburse the cost of should they lose their case.

Last month the first to pull the trigger was U.S. Law Shield who announced a suit against Pennsylvania’s capital city of Harrisburg, taking aim at a series of local statutes mandating the reporting of lost and stolen firearms, possession of guns in city parks, discharge of weapons in the city limits, and the use of guns by minors.

Second Amendment attorney Joshua Prince, on behalf of a coalition of several groups including Firearms Owners Against Crime, an early and vocal supporter of Act 192 during the legislative process, promised to take on the city of 50,000 as well.

Since then the NRA has brought suit against Lancaster and filed paperwork exploring the same against both Pittsburgh and Philadelphia.

There is some push back against Act 192, however. A collection of lawmakers, allied with a state gun control group, are challenging the preemption measure while State Attorney Gen. Kathleen Kane announced she would not defend such an attack.

“In the meantime, these cities likely will file for a stay of the lawsuits in the courts while the constitutional issues are decided,” wrote gun control advocate Fritz Walker in an op-ed for the Morning Call this week.”If a stay is granted, court costs and attorney costs should stop accumulating. If Act 192 is ruled unconstitutional, the suits against the cities should be dismissed with no award of costs or fees. In the unlikely event Act 192 is upheld, a city could then rescind the challenged ordinances and any costs awarded should be limited to the small amount required for filing the suit and motions regarding the stay.”

Harrisburg city officials are due in court Friday.