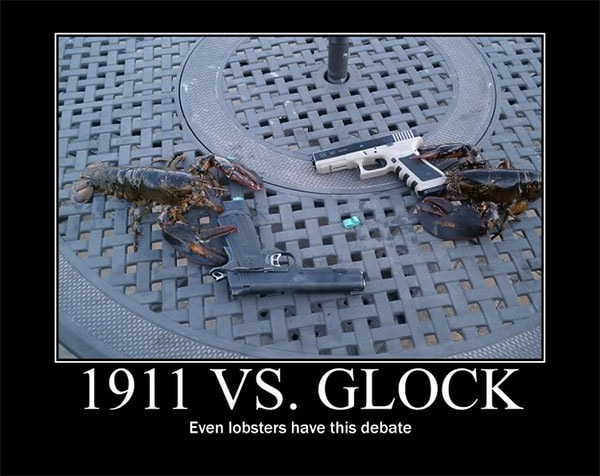 I recently saw a post on a social media site that asked, which is better, the Glock or the 1911?  As expected, this question garnered a lot—and I mean a lot—of attention and I read intelligent comments from both sides of the aisle.

To be fair, I believe that comparing 1911s to Glocks really is like comparing the proverbial apples to oranges. Yes, they are categorically similar–both of them are semi-automatic pistols–but the exercise (at least the way it was worded on this FB post) is pretty fruitless when you figure all you’d have to consider in a true assessment. That said, I do think it’s appropriate, our right even, to argue which one tastes better.

Debates over these two handguns have persisted ever since the Glock hit the market. As legend tells it, Col. Jeff Cooper himself received one of the first serial numbered Glock pistols as a gift.  Allegedly, he went directly over to a trashcan and threw it away, adding something derogatory about plastics.  Ever since, supporters of 1911s have felt a “real” handgun needs to be made out of metal.

No matter if you believe this piece of firearms folklore or not, the truth of the matter is that plastics have come a very long way since Jeff Cooper’s day. I can’t claim to know the facts behind the story, but if you want my opinion, I believe it’s just that—a tasty tall tale happily retold by 1911 lovers. And 1911 lovers have a lot to love these days.

In fact, I think you’d really have to break the debate down by brand–Glock v. Browning, or Glock v. Colt, or Glock v. Kimber–to make an honest comparison of these two weapons. Each of these guns represents a unique take on the 1911 design, each has their own tweaks and quirks. Anybody who shoots a pistol and reads Guns.com knows that this list can go on and on–Wilson Combat, Springfield Armory–with even Remington and Sig Sauer jumping on the bandwagon.  And that’s not even mentioning the double stacked 1911 manufacturers like Paraordnance who pioneered the genre.

Today, it seems every gun maker has taken a run at old slabsides at one time or another, which is undoubtedly a testament to the strength of its 100-plus-year old design.  But, if we’re going to allow all these different models into the conversation, what about Glock’s legacy?

Without a doubt, Glock started a polymer revolution, so wouldn’t an honest comparison of these designs also have to include all of Glock’s striker fired successors? The Springfield XDM has won a gazillion awards, as well as the Smith & Wesson M&P.  Both of those “plastic” guns have striker fired actions and look more like a Glock than many 1911s look like other 1911s nowadays.  At this point, we’re comparing a lot more than just two guns.

In short, asking which one is better, a Glock or a 1911, just doesn’t make any sense to me–it really is as useful as comparing apples and oranges.  All that really matters is which one you like better.

(But who wants to hear that! So stay tuned for Part II, for the Glock v. 1911 showdown you deserve.)