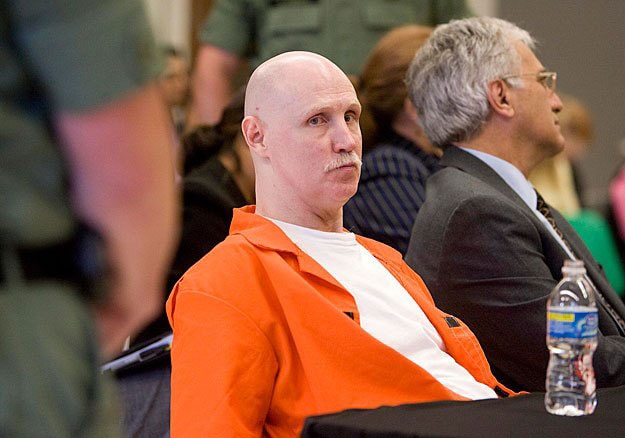 Convicted murderer Ronnie Lee Gardner, 49, was put to death by firing squad at the Utah State Prison in Draper on June 18, 2010.

Who says all politicians are bad?  I like what one Utah politician has proposed–bringing back death by firing squad to his Western state.

If you follow my column, you may already know that I’m a huge proponent of capital punishment.  It may sound calloused or trite to some, but it I sincerely believe that not enough criminals are put on death row.  The people who actually receive such a sentence are the worst of the worst; the most evil human beings in our society.

Sadly, too many cases end in plea deals, and worse still, a handful of states throughout the nation have ended capital punishment altogether.  What’s the deal with sentencing someone to two life sentences or 190 years in prison?  That’s a stupid waste of taxpayer money.

I have a close friend who was murdered in Texas.  He and I were police officers together in Dallas.  I still keep in touch with his widow.  Thankfully, his murderer is on death row, but these monsters are given practically endless appeals and the earliest a death sentence gets carried out these days still takes about seven years.  I say that’s at least six years too long.  Let ‘em go.

I’m not preaching some “eye for an eye”-type philosophy either.  There is no amount of justice that can be done that will bring back the victims of the most horrific and heinous crimes.  Capital punishment is not about justice, rather it’s about making evil murderers leave society as there is no place for them in it.  I’m preaching good, old fashioned common sense.  Remove the danger from this earth.

Utah did away with the firing squad option a few years back, in 2004.  Lawmakers back then said giving the inmates the option to choose death by firing squad gave them too much media attention.  Even so, inmates sentenced before 2004 could opt to be shot.  The last one was in 2010 when five officers blasted the condemned with .30-cal Winchester rifles.

Presently, proposed legislation would again allow inmates on death row to the option to be shot by a firing squad–which makes a lot of sense for a number of reasons.

I think one of the main reasons Utah is looking at reinstating death by firing squad is because it’s way cheaper.  The company who makes the ultra lethal concoction for “death by lethal injection” used by the state has been taking heat recently after it was proposed, and then championed by certain media forces, that the drug might cause pain before death.  With this claim came a slew of anti-death penalty lawsuits across the country and the cost of the drug is now sky high.

Sure, it’s also humane, if that’s your concern.  Frankly, I feel that anyone who says lethal injection, firing squads or the electric chair are not humane should go ask the victims about the terror, pain and “humanity” they felt while they were being killed and since they can’t do that–because these people are dead–maybe they should speak with the family members whose loved ones were mutilated, raped, tortured and dismembered by these evil men on death row. Killing a person is not a violation of the Eighth Amendment, which deals with cruel and unusual punishment.  In this case, it’s executing the law.

Unfortunately though, it seems a lot of media folks who oppose capital punishment are too eager to report on the moans and pains of murderous inmates who struggled because the guy putting in the IV missed the vein the first time. To them I say, concentrate on the stories we know are real: about why these murderers ended up on the executioner’s block in first place, and why their appeals were all denied for over seven years. Anyone who takes an attitude of anti-violence towards murderers who’ve been sentenced under a fair judicial system are doing a huge disservice to society and to the family of the victims.