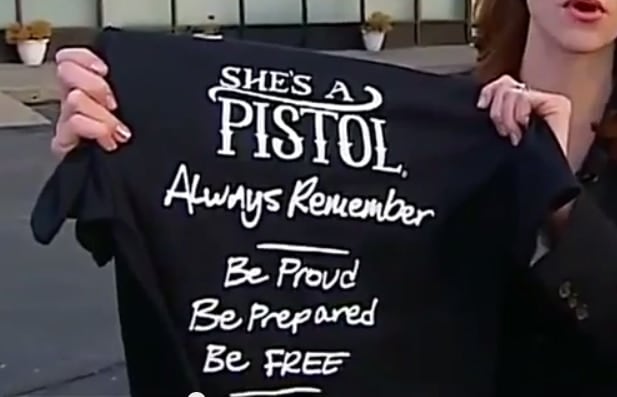 Orders for the memorial T-shirts have been placed from all across the country. (Photo: KMBC)

She’s a Pistol, the gun shop in Shawnee, Kansas, which was the scene of a botched robbery last month, resumed some classes last week and opened its doors for just a few hours on Sunday to sell T-shirts in memory the store owner, Jon Bieker, who was fatally shot during an exchange of gunfire with the robbery suspects.

Although the shop has not yet fully reopened, Bieker’s wife, Becky, plans for a grand reopening within the next couple of weeks. The proceeds from the sales of the T-shirts, which can also be purchased on the company’s website, along with donations collected, will be used to rebuild and reopen the gun shop. As the young widow prepares to reopen the shop, which has now been closed for nearly a month, the community has showed an out-pour of support.

“I’m very proud of her for wanting to keep on and open again, it’s a hard thing to do,” Kathy Olson told a local Fox affiliate.

Olson, a Shawnee resident, visited the store Sunday to purchase one of the memorial T-shirts, which display “The Ultimate Price” on the front, and “Always Remember. Be Proud. Be Prepared. Be FREE.” on the back.

Becky survived the violent midday robbery attempt after her husband opened fire on the four armed suspects, striking three before he was shot and killed during the exchange. One of the suspects was just released from the hospital last week, and all four are now facing charges. Becky, who was also assaulted during the botched robbery, said in a statement following the incident that her husband saved her life “because he carried a firearm.”

Fred Hilton, a customer from neighboring Merriam, came to the store over the weekend to show his support for Becky.

“I felt compelled to come out and honor these folks,” said Hilton, who plans to get a concealed carry permit after what happened to the Biekers. He believes the couple got a “raw deal” when they were targeted for the robbery.

Friends of the Bieker family, James and Beth Kornegay, told reporters that Becky has been overwhelmed with the support she’s seen, but it will still take her some time to recover.