Legal firearms suppressors could soon be allowed in Illinois 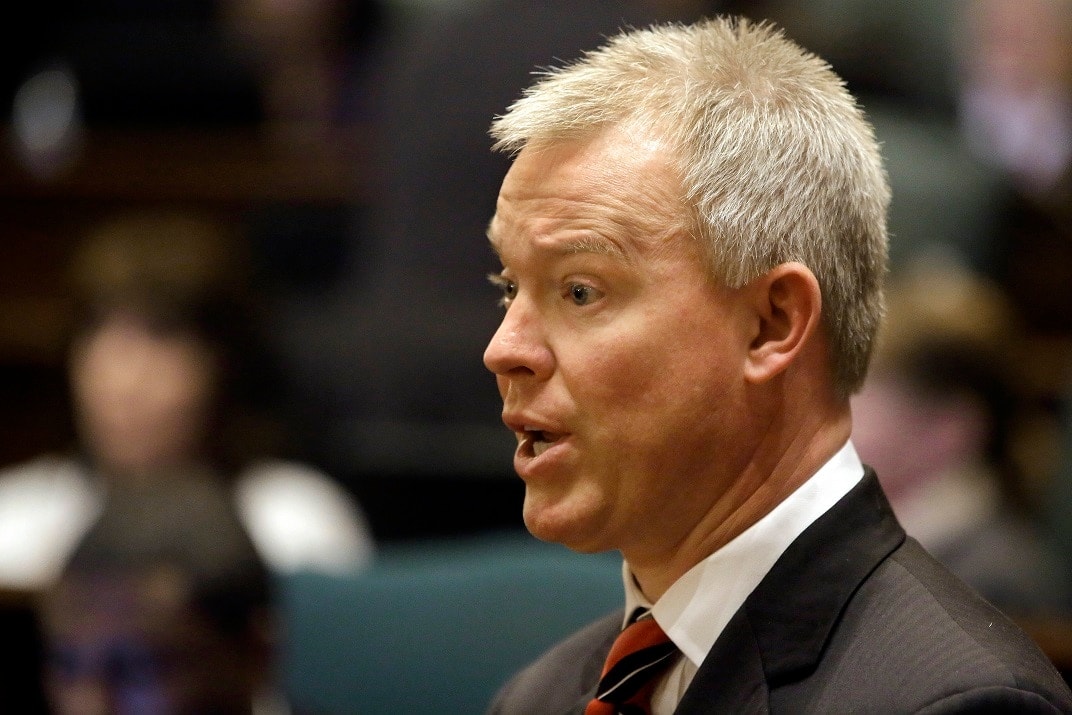 Illinois Rep. Brandon Phelps, D-Harrisburg, is sponsor of a bill in the state House to bring suppressors to the Land of Lincoln. (Photo: AP/Seth Perlman)

If legislation introduced by Democrats in both houses of the Illinois state legislature passes, the Land of Lincoln could be the 39th state to allow citizens the use of suppressors.

Dual bills in the state Senate and House introduced last week aim to not only make National Firearms Act-compliant sound suppressors legal, but also to allow their use in hunting. Illinois is one of just 11 states that currently prohibit the devices.

“There are a lot of veterans, a lot of hunters and shooters, who have suffered hearing loss,” State Rep. Brandon Phelps, D-Harrisburg, sponsor of the House legislation, told the Belleville News Democrat.

Phelps is ready for a fight to get the bill passed, saying, “We’re just trying to move Illinois into the 21st century, like we did with concealed-carry.”

Phelps’s legislation, HB 433, is identical to that of Sen. Bill Haine, D-Alton, whose SB 803 was introduced to the state Senate simultaneously. The measures would strike the state’s blanket prohibition on suppressors of all kinds. In turn, it would replace it with language allowing the use of the devices as long as they are NFA-compliant and the user also had a state-issued Firearm Owner’s Identification card.

According to March 2014 statistics from the Bureau of Alcohol, Tobacco, Firearms and Explosives, the 12.8 million person state has just 1,348 NFA-registered suppressors, primarily in use by law enforcement. As a comparison, Pennsylvania, with a virtually identical population and less stringent suppressor regulations, has some 20,629 devices registered in the National Firearms Registration and Transfer Record. Meanwhile, Illinois’s neighbor to the East, Indiana, although with half the population, has 22,223 suppressors on file.

Gun control advocates are not enamored with the idea of legal suppressors in the state no matter who is behind the legislation.

“We think the Illinois state legislature should focus more on policies that will do more to save lives,” said Brian Malte, national policy director for the Brady Campaign to Prevent Gun Violence. “This includes policies like gun dealer licensing that will help law enforcement crack down on negligent gun dealers that supply many of the crime guns to cities like Chicago.”

NFA industry groups explained to Guns.com that much of the concern over legal suppressors is unfounded, painting the devices as safety equipment.

“Noise induced hearing loss and tinnitus are two of the most common afflictions for recreational shooters and hunters,” Knox Williams, president of the American Suppressor Association told Guns.com. “Walk into any gun store in the country, and you will see as many, or more, customers with hearing aids as without them.

Everyone knows that guns are loud, but very few people understand the implications that shooting has on their hearing until it’s too late. Most hunters do not wear hearing protection because they want to be able to hear their surroundings. The trouble is, exposure to even a single gunshot can, and often does, lead to permanent hearing damage,” Williams said.

In recent years, pro-suppressor legislation has gained traction nationwide. Last year alone Ohio, Louisiana and Georgia saw lawmakers responding to increased pressure from sportsmen and hobbyists to expand protections and use for suppressors. This came while Alabama saw regulatory changes that paved the way for hunters to use their suppressors for the first time in generations.

This January a Florida judge dismissed a challenge to a law expanding use in the Sunshine State.

The fact that Democrats, Williams feels, back the Illinois legislation could be key to its passage.

“The American Suppressor Association is now working with Rep. Brandon Phelps to help make recreational shooting and hunting a safer experience in Illinois. Given his outstanding track record of bipartisan accomplishments, we feel confident that we will be able to avoid the traditional partisan politics that bog down many firearms issues,” Williams said.

The Illinois House and Senate bills have been referred to the Rules and Assignments committees respectively.