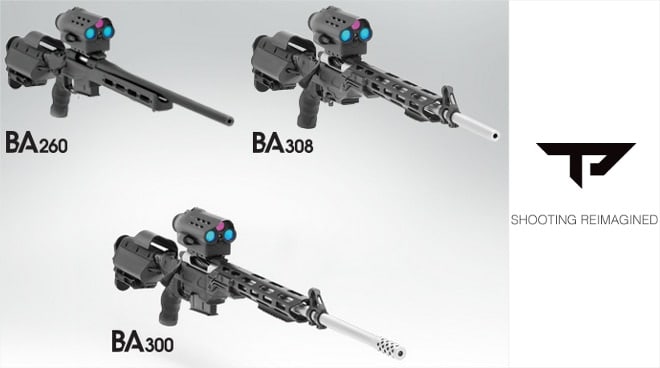 The BA series, in .260 Remington, .308 Winchester and .300 Win. Magnum are all lighter and lower-priced than the original rifles. (Photo: TrackingPoint)

TrackingPoint has just announced a new generation of guided rifles that can track targets out to half a mile away at speed of up to 20 miles per hour. Despite the new features these guns cost thousands of dollars less than the first crop of of their electronically-assisted rifles.

The new trio of bolt guns makes up the BA series, a bolt-action lineup offered in .260 Remington, .308 Winchester and .300 Winchester Magnum. The .30-caliber rifles are priced at $12,995 — about half the price of the original models and the .260 Rem. is one of the least expensive TracingPoint rifles of all at $7,995.

These new rifles work the same way as other TrackingPoint guns. The user sets the value for wind speed, zooms in on the target, tags it and then pulls the trigger — except the rifle won’t fire until after the shooter re-acquires the target, and only when the shooter lines up the perfect shot.

The rifle won’t let a round downrange if the gun is in a less than ideal position. It essentially eliminates all bad shots, leaving only the best, most precise shots possible.

Both of the .30-caliber models, the BA 308 and BA 300, have smart scopes that can tag and track targets out to half a mile — 880 yards — while the lower-priced BA 260 has less powerful scope tech than the more expensive models.

Nevertheless the entry-priced BA 260 is still impressive, capable of tracking targets out to just over 500 yards and at speeds up to 10 miles per hour.

All three are built to the same standards, with a world-class .047 MOA accuracy rating. Putting things into perspective, some of the best semi-custom precision rifles without TrackingPoint’s guided rifle technology have a .5 MOA guarantee — 10 times the spread downrange.

TrackingPoint makes this possible by tracking as many factors as possible before releasing a shot including tracking the rifle’s movement, compensating for angle and cant, measuring air temperature and barometric pressure and other forces, inside and outside of the rifle.

TrackingPoint has developed technology to adjust for barrel heat and harmonics even as they change shot after shot and the rifle’s computer system even takes planetary motion into account when shooting across longitudes and compensates for the Coriolis effect. 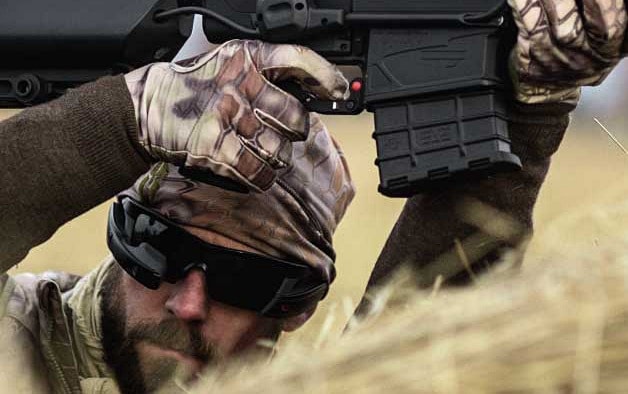 With ShotGlass technology it’s possible to shoot behind cover without revealing your position. (Photo: TrackingPoint)

The BA series maintains all of the features that have made TrackingPoint’s guns famous including the ability to transmit scope data wirelessly to tablets and now smart glasses.

This allows multiple people to effectively look through the scope, which can be handy for teaching new shooters and new hunters. It also allows users to record their shots as trophies.

It’s when TrackingPoint’s ShotView tech is used with its ShotGlass system that things get really interesting. With the scope data wirelessly transmitted to the shooter’s smart glasses, it’s literally possible to shoot around corners with these rifles.

While that clearly has tactical applications, keeping professional shooters behind cover while being able to return fire, it’s not lost on hunters at all. Being able to maneuver the rifle into position without revealing your position can be the difference between bringing home some types of game and leaving empty-handed.

But what probably makes this new crop of guided rifles stand out has to be the lower prices. While they’re still out of reach for many shooters and hunters, the most expensive of these rifles costs less than half of what the least expensive originals run.

This means that this precision-guided firearm tech is no different than other gadgets and technologies. It’s getting better, cheaper and faster. Someday, possibly sooner than most people would expect, we might come see this type of smart rifle glass as the norm.