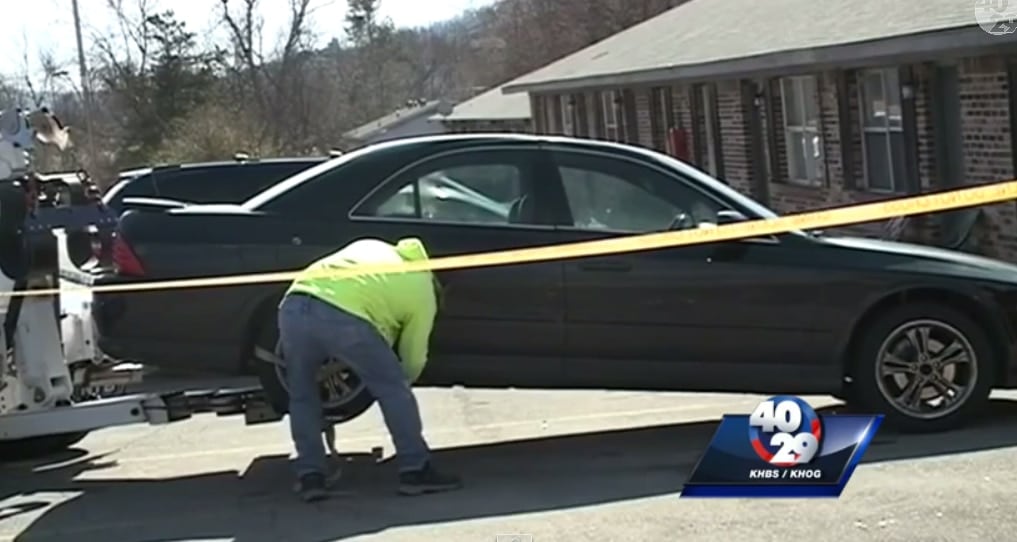 Police towed the vehicle which had several bullet holes and was believed to be used during the robbery. (Photo: 40/29 News)

Two suspects were arrested Sunday following an attempted robbery of a Fayetteville, Arkansas, pharmacy Saturday afternoon which quickly came to an end when the pharmacist shot at the suspects.

It was about 3:30 p.m. when the two suspects entered Medcap Pharmacy, local media reported. One of the suspects initially went to the restroom inside the pharmacy before coming out and striking the pharmacist over the head with a crowbar several times.

However, after the pharmacist was attacked, he retrieved a firearm and shot the suspects as they fled the shop and drove off in a Lincoln sedan. The suspects’ car was struck by gunfire multiple times, and police later discovered that a third person was waiting in the vehicle.

It’s unknown if the suspects made off with anything.

The pharmacist was transported to the hospital where he received treatment for his injuries, which included five staples in his head.

Following the robbery, local law enforcement sought the public’s help in finding the suspects by providing images of the suspects and their vehicle from the shop’s video surveillance. Within hours, the Fayetteville Police Department had received an anonymous tip naming an apartment complex where the suspects were believed to be staying.

Police surrounded the apartment for about an hour on Sunday before apprehending three suspects.

Two of the suspects were identified as Hendrik and Melanie Hornsveld, and both are wanted for other ongoing crimes. The third suspect, who engaged in the robbery at the pharmacy, is an unidentified minor.

Police confirmed that Hendrik and the minor were shot during the attempted robbery. Once in custody, they were transported to a local hospital where they were treated and released into police custody.

The person who lives in the apartment where the suspects were apprehended told authorities that the three showed up asking for help after the robbery. The resident said he helped tend to their wounds and clean their bloody clothing.

Robert Porter lives in the apartment complex and witnessed authorities storming the apartment and taking the suspects into custody. Porter said both men were bleeding when they emerged from the apartment.

“It’s heartbreaking, it’s really sad,” Porter told reporters. “Everybody has to work hard and some people work harder than others for little money, but we don’t resort to hurting people, and robbing people and stealing.”

Melanie admitted to investigators that the three are addicted to narcotics and were attempting to feed their addiction. She also told authorities that she instructed the juvenile to rob the pharmacy with Hendrik while she waited in the car.

The suspects are charged with aggravated robbery, aggravated assault, engaging in a continuing crime gang and second-degree false imprisonment.