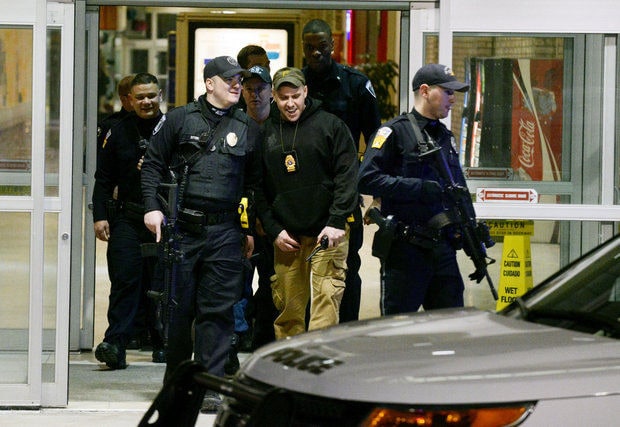 Police exit the Monroeville Mall Saturday, Feb. 7, 2015, after a shooting that left three in the hospital. As a byproduct, of that event, youth under age 18 will not be allowed in on weekend nights without an escort. (Photo: Bill Wade/Pittsburgh Post-Gazette)

As part of its response to a shooting by a 17-year-old that left three injured last weekend, the Monroeville Mall in Western Pennsylvania will card and eject teens without an adult with them on weekend nights.

The 170-acre gun free zone outside of Pittsburgh plans to institute a Youth Escort Policy effective Feb. 27 that will not permit unsupervised shoppers under the age of 18 to congregate in the mall parking lot or enter the facility after 6 p.m. on Friday and Saturday nights. Adults age 21 and over may escort their children, or up to three teens, and there are exceptions for minors who have jobs in the mall’s 125 businesses.

“We’ve examined a lot of our incidences over the past year and found that a lot of the problems that have occurred have been a result of unsupervised youth,” Stacey Keating, with CBL, the corporation that runs the mall, told KDKA. “Security officers are going to be prepared to ask for identification if a person’s age cannot be easily determined and they appear to be under the age of 18.”

Before last weekend, the 1.4 million square foot retail outlet was perhaps best known as the filming location for the 1978 zombie film, Dawn of the Dead. However, increasing violence from unsupervised teens in the past several weeks has eclipsed its campy legacy.

Last Saturday night, Tarod Thornhill, 17, allegedly came to the mall and opened fire inside the Macy’s department store at about 7:30 p.m. Injured was a man reports cite as being targeted by Thornhill as well as two bystanders.

Following the shooting, the mall went into lock-down as thousands of shoppers fled the area which contributed to the shooter’s escape. However, Thornhill was later taken into custody at his home on Sunday.

According to reports from WTAE, Thornhill had a previous criminal history and often posted images of him posing with weapons to his social media account. He is currently being held under a $200,000 bond and is charged as an adult for attempted murder, reckless endangerment and aggravated assault.

In addition to carrying a handgun illegally at the time, Thornhill was in violation of the Monroeville Mall’s strict policy against allowing weapons of any kind on site with exceptions made only for certified law enforcement.

Just weeks prior to last weekend’s shooting, a massive brawl in which security staff estimate as many as 1,000 teens and adults participated, garnered national headlines as video of that incident went viral. As in the case of the shooting last weekend, the December brawl occurred on a weekend night.

Four on-duty police officers will further beef up the mall’s security on Friday and Saturday evenings according to Monroeville Mayor Gregory Erosenko.