Remember the Bug-A-Salt? It was a cutting-edge aerospace-grade polymer-framed fly hunting machine introduced to the coffee table defense market back in 2012. A fantastic concept, the design left some room for improvement.

The idea is simple. Take a hand-charged pump action salt gun, point it at flies, solve your fly problem. Powered by elbow grease and loaded with table salt, the original Bug-A-Salt quickly made a lot of people happy, but left a few frustrated.

A significant percentage of what is now the Bug-A-Salt 1.0 had flawed gears that could not handle the amount of energy discharged with every tangy blast, either failing to deliver payloads with adequate force to ensure ethical culls or breaking completely.

While none of the malfunctions led to catastrophic failures, the original Bug-A-Salt earned a spotty reputation.

Not willing to let the idea fade into obscurity, the Bug-A-Salt team has rallied together to make the all-new Bug-A-Salt 2.0. Like the first Bug-A-Salt the Model 2.0 is being launched on Indiegogo, a crowdfunding website.

But this time, there’s no risk. Thanks to hundreds of Bug-A-Salt devotees the Bug-A-Salt 2.0 has already reached its funding goals and will soon be in full production, with delivery on the first wave of Bug-A-Salt 2.0 shotguns starting next March.

This means that all campaign pledges are guaranteed to be rewarded, with supporters receiving their choice of the new Bug-A-Salt 2.0 with the new Camofly woodland-colored camo finish.

The Camofly model can be yours for $55 in the continental U.S. or $70 for delivery to Alaska and Hawaii. The new design is even more powerful and has better gearing in order to ensure that you can pass down your Bug-A-Salt 2.0 to future generations or just hand it over when you get bored of it.

Of course, if you prefer to go bug-hunting with a kid in tow, there’s always the Bug-A-Salt Buddy deal. Priced at $85 the combo includes one Camofly model and one standard, high-visibility yellow.

Both models carry the Bug-A-Salt 2.0 upgrades including a new salt hopper that uses less salt per shot for higher muzzle velocities and more time between reloads. 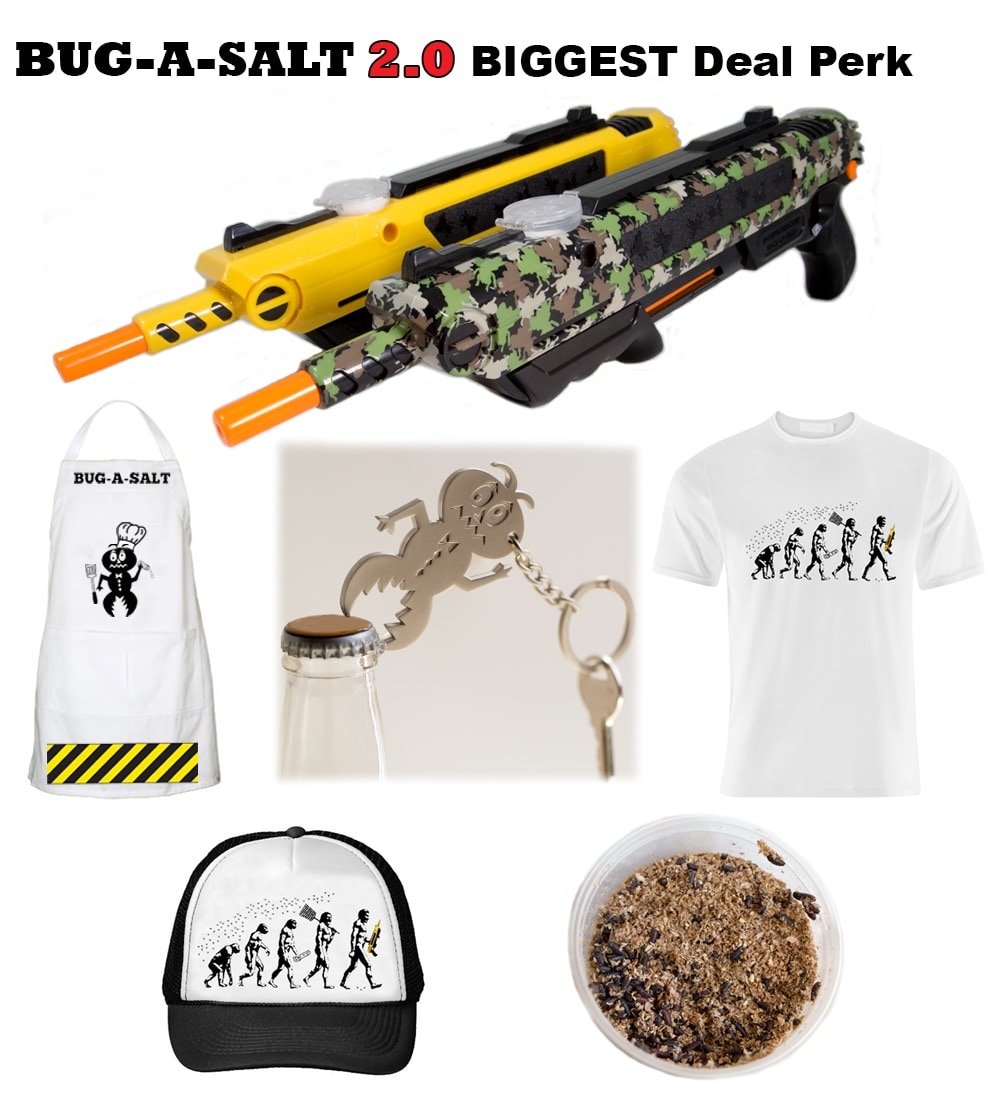 Not kidding about the maggots. You can farm your own with some of the less basic Bug-A-Salt perks. (Photo: Skell)

The case for wanting a Bug-A-Salt 2.0 isn’t hard to make. It’s safe, clean, environmentally friendly (except where flies are concerned) and effective indoors and out.

If you’re hankering to get your new and improved Bug-A-Salt action on, then swing by the Bug-A-Salt 2.0 fundraiser page and buy yours today.