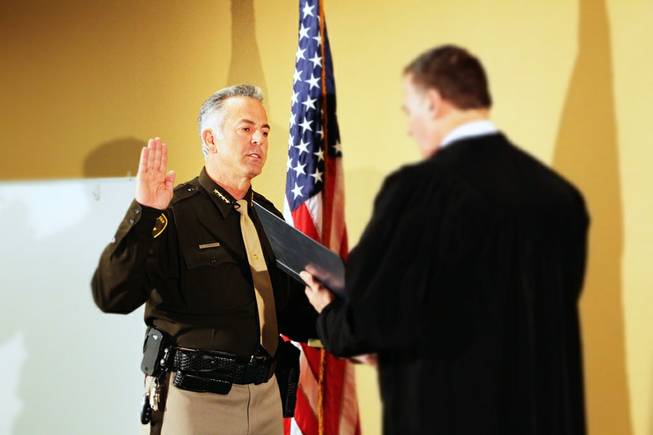 Las Vegas area gun owners may soon be able to disregard the county’s 67-year-old blue card program, the only one of its kind in the state, which requires registration of handguns.

Implemented in 1948, when the area was frequented by notorious East Coast mobsters such as Lucky Luciano and Meyer Lansky, Clark County’s mandatory handgun registry survived a 1989 preemption law by being grandfathered, effectively making it the only place in Nevada that requires gun registration. However there is a new sheriff in town and he is ready to pull the plug on the program.

“I believe that it’s a redundant system,” Sheriff Joe Lombardo told media last fall while he was a candidate for his current office.

With Lombardo now in the driver’s seat, the powerful Republican Speaker of the state Assembly, John Hambrick, has filed legislation to run in the relic of Vegas’s bad old days.

Hambrick’s bill, AB 127, would homogenize gun laws in the state, striking language that exempts Clark County’s gun registry. Currently the county, with some exceptions, mandates that all handguns with a barrel less than 12 inches be registered within 72 hours of being purchased by an area resident. Those who move to the county and stay more than 60 days likewise have to obtain a blue card – known as such by its color – from police. Registration involves a cursory background check and is without fees to the gun owner.

While the Sheriff and Speaker Hambrick are in favor of repealing the dated system, there may be others that need convincing.

A similar effort in 2013 brought opposition from both Henderson Police Department and Las Vegas Metro leaders who felt the registry of some 1.2 million handguns is a valuable investigative tool for law enforcement. Even if the local police agree with the sheriff this time around, there are still other factors at play.

“The newly elected sheriff has already said he already wants to do away with the blue cards,” Hambrick said after his bill was introduced. “Now whether the County Commission will go along with it remains to be seen.”

Further, community groups have already gone on record opposing any move to discontinue the registry.

With national gun control groups now far more involved in Nevada than in 2013, it remains to be seen whether they will get involved in attempting to save the now-threatened blue cards.

Other counties in the country have recently done away with antiquated handgun registries that had somehow remained in effect. Last summer an almost forgotten Jim Crow-era firearm registry in Durham County, North Carolina was repealed by unanimous vote of the state house. That registration scheme, enacted in 1935, had required gun owners to register their firearms with the county clerk and was the only one of its kind in the state. Following its repeal, county officials publicly shredded eight decades of records.

Nevada AB 127 has been referred to Committee on Government Affairs.