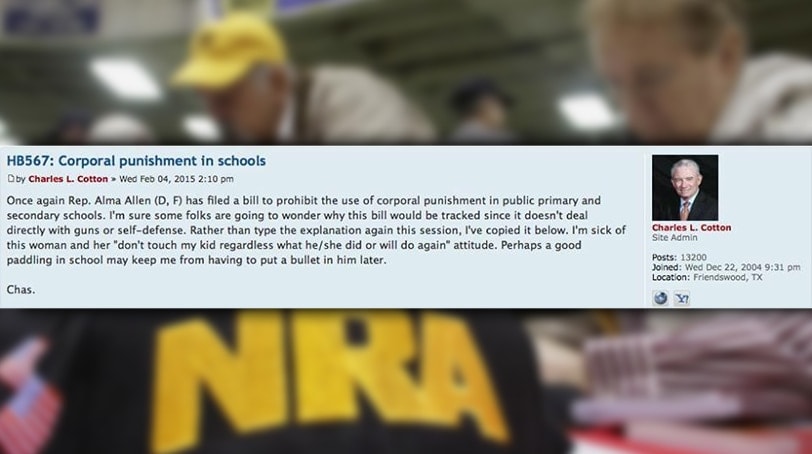 Charles Cotton is being criticized for comments he made online regarding corporal punishment in Texas schools. (Photo Illustration: TexasCHLForum.com and Associated Press)

A National Rifle Association board member last week made a controversial statement about in corporal punishment in Texas schools that has gun control advocates enraged.

“I’m sick of this woman and her ‘don’t touch my kid regardless what he/she did or will do again’ attitude,” Cotton wrote in the thread, which is currently not accessible. “Perhaps a good paddling in school may keep me from having to put a bullet in him later.”

Cotton was referring to “House Bill 567: Corporal punishment in schools,” introduced in December and would affect primary and secondary schools in the state should it pass.

The post was seized upon by media and gun control advocates, who called for Cotton’s removal from the NRA board.

“Please let the NRA know that Charles Cotton needs to be removed from its board of directors and to remind all of America that children are our greatest treasure and depend on us to love, nurture, guide, and develop them, not harm them,” read a call to action posted by Susan Dreyfus, president of the Alliance for Strong Families and Communities.

Neither Cotton nor the NRA could be reached for comment by story publication.