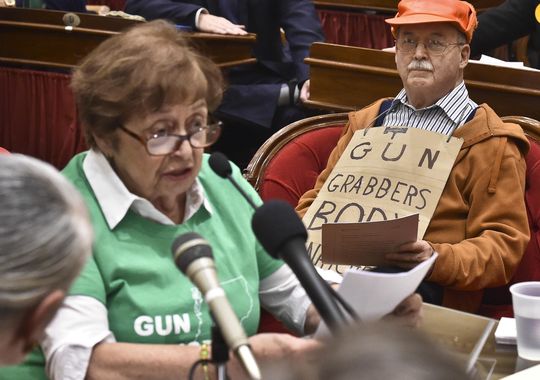 Green-clad gun control advocates and Second Amendment supporters in orange faced off at a public meeting at the Vermont Statehouse in Montpelier. (Photo: Glenn Russel/Free Press)

A measure that promises to make Vermont safer by expanding background checks to include almost all gun transfers saw heavy public debate Tuesday in Montpelier.

Gun control advocates cite that this would close a loophole in state law. On the other hand, gun rights supporters feel the measure is unneeded in a state that is counted among the safest in the country.

Both sides were out in force to let their feelings be known during Tuesday night’s public hearing at the Statehouse.

According to the Rutland Herald, 108 people signed up to give testimony, with only about one-third scheduled to speak in support of the bill.

“I have come to the conclusion that the gun owners who are against this bill must have something to hide. Please keep me just a little safer and pass this bill,” said Barbara Scotch of Montpelier.

It was widely reported that orange-clad Second Amendment rights supporters from Gun Owners of Vermont, the Vermont Federation of Sportsmen’s Clubs and others outnumbered green-wearing Gun Sense Vermont members in the crowd, estimated to have swollen to over 600.

“This is passed would be only the first step in an incremental war on the rights of law-abiding Vermonters,” Eddie Garcia told lawmakers. “Article 16 of the Vermont Constitution is clear that the people have the right to bear arms for the defense of themselves and the state. I don’t propose to stand idly by and watch that chipped away at.”

Also on hand to voice opposition to the legislation was Barre Police Chief Timothy Bombardier, on behalf of the Vermont Association of Chiefs of Police. Bombardier told state senators that the Association does not endorse S.31 and further stated that data linking guns and domestic violence was inconclusive.

The legislation, if enacted in its current form, would prohibit almost any sale between two otherwise lawful gun owners unless they first transfer the gun to a Federal Firearms Licensee who would conduct a background check and fill out required Bureau of Alcohol, Tobacco, Firearms and Explosives paperwork, for which a fee could be charged. Those who violate the proposed law could be imprisoned for up to one year, fined $500 or both.

The call for expanded background checks at the state level has become in recent months the calling card of gun control organizations.

In 2014, Washington state held a historic up or down ballot initiative that passed by nine points to mandate an 18-page measure to greatly expand checks in that Pacific Northwest state. Former New York Mayor Michael Bloomberg’s Everytown for Gun Safety group funded the lengthy campaign in large part.

Following the Washington win, Everytown moved on to Nevada while promising to recycle the same model in other states.

Support from the Everytown group for the background legislation in Vermont has included a controversial sting into online gun sales released last month that claimed 1 in 24 online gun buyers were prohibited from possessing guns.

However, the group later found themselves backtracking to some extent when a local gun shop, Crossfire Arms of Mount Holly, Vermont, threatened a lawsuit after the Bloomberg organization used images belonging to the Federal Firearms License holder as part of their investigation.

The Vermont Senate Judiciary Committee is set to hold further hearings on S.31 later this month.