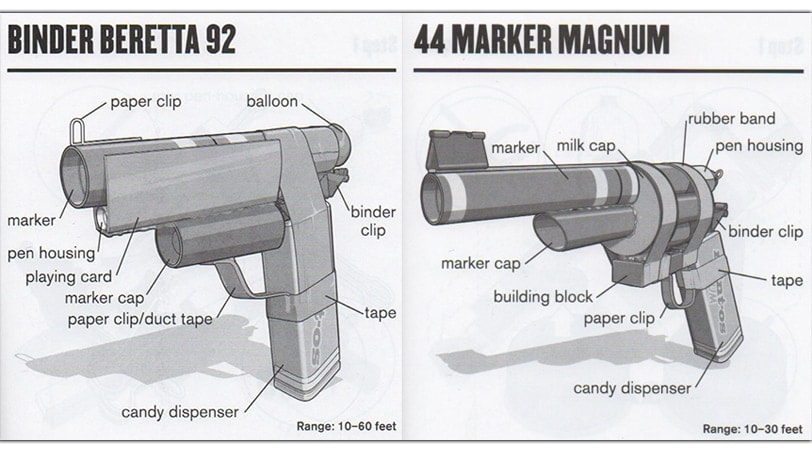 A book at the Liberty Science Center teaches kids how to make fake guns out of ordinary household items.
(Photo: “Mini Weapons of Mass Destruction 2: Build a Secret Agent Arsenal”)

A book at the Liberty Science Center in New Jersey which details how to make a fake gun with common household items has one gun control advocate calling for its removal from the shelf.

“We shouldn’t be teaching children that it’s easy to make a realistic-looking Beretta out of things you can find around the house,” gun control advocate Michael C. Alcamo told The Jersey Journal. “That’s a way to guarantee a tragedy.”

The 256-page “Mini Weapons of Mass Destruction 2: Build a Secret Agent Arsenal” is written for children and gives step-by-step instructions on how to make toy guns modeled after the real thing, The Journal reported.

The museum said it wouldn’t heed Alcamo’s call to have the book removed and called it a “quirky, hands-on” approach to teaching kids about science.

“If a parent doesn’t want her child to build a periscope from a toothpaste box or a tongue-depressor catapult that launches mini-marshmallows or a so-called Candy Glock from a balloon, a playing card, and a plastic soda bottle, he doesn’t have to buy the book,” LSC spokeswoman Mary Meluso said.