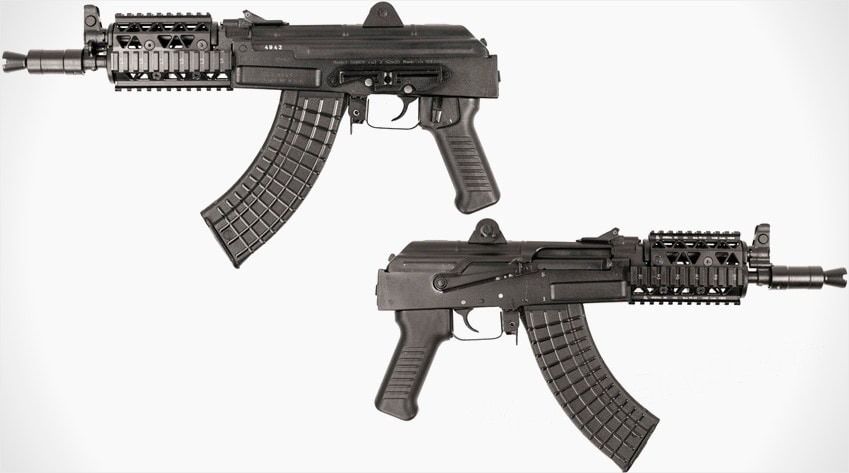 K-Var is re-releasing seven Arsenal Krinkov-style AK-pattern pistols and rifles with new, short little quad-railed handguards. These are being offered in a wide variety of configurations including four pistols, a carbine and even a pair of short-barreled rifles.

Rifle-pattern pistols are hot right now, even after the ATF has re-classified pistol braces as stocks if they are shouldered, and the Krink style lends itself perfectly to pistol designs.

The reason the 7.62×39 model run a little more is that they’re built on Arsenal’s best-in-class forged and milled receivers. The only thing that will stop these pistols is deliberate abuse, and even then, good luck with that.

The other six models. (Photo: K-Var)

The 5.56 pistols use Arsenal’s slightly less bulletproof stamped receivers that help keep cost and weight down. The 5.56 models weigh considerably less than the 7.62×39 pistols at 5.5 and 6.5 pounds versus 8 and 9 pounds (the brace kits account for the extra pound).

Other factors that keep the 7.62×39 price up are the wide availability of magazines and parts and accessories. Also 7.62x39mm loses less velocity out of the shorter barrel making them better suited for utility work than the 5.56 models.

That being said 5.56 is easier to shoot and equipped with chunky two-baffle muzzle brakes the 5.56 NATO pistols are guaranteed to be fireball machines.

For people who want more stock in their guns Arsenal has you covered with their carbine and SBR models.

The carbine is chambered in 5.45x39mm and while it looks a little funny with the extra rail, for shooters who like a magwell hold or like to use a foregrip up close it’ll work just fine. Of course the target market for these are SBR builders who intend to buy a carbine today and then cut down and thread the barrel after getting the green light from the ATF.

The other two models are for people who can wait a little longer between buying their gun and taking it to the range. These are being offered in 5.45 with a triangle side-folder and in 5.56 with a standard polymer folding stock.

Really the only downside is that the rifles aren’t nearly as attractively-priced as the pistols starting at $1,419 for the carbine and topping out at $2169 for the triangle folding 5.45.

At those prices many shooters will opt for the brace-equipped pistols and then talk to the ATF about putting an AR-15 stock onto them for SBR purposes, but hey, these are Arsenal rifles, somebody will buy them no matter what the cost.

Arsenal makes great guns, there’s no way around that. For more information about these updated products and the rest of their catalog head over to the Arsenal website.