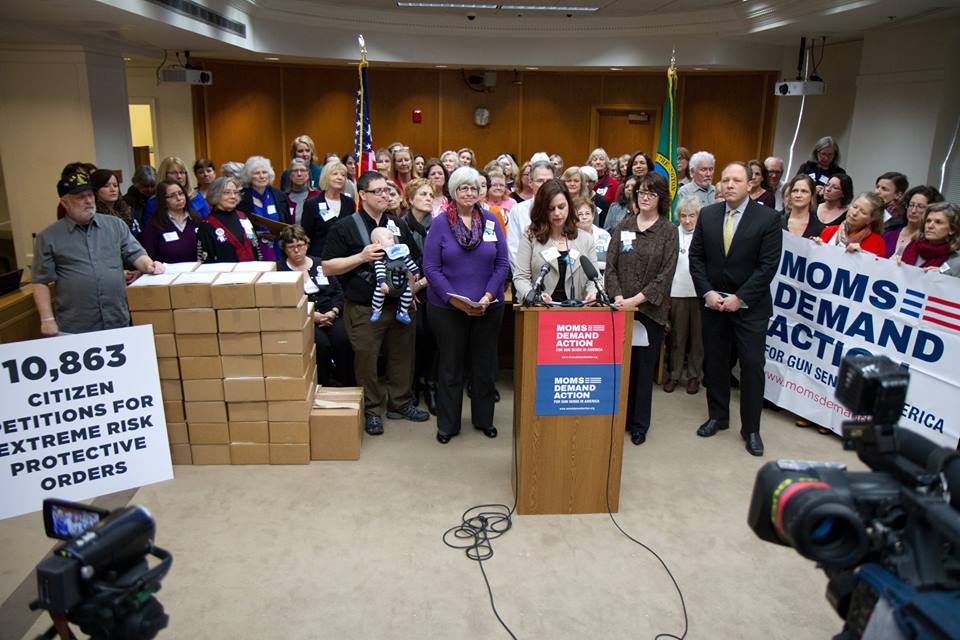 The group, part of former New York Mayor Michael Bloomberg’s Everytown for Gun Safety umbrella formed last spring, backed I-594, a ballot referendum that passed in November by nine points. The organization not only wants to keep that 18-page measure which bans most private gun transfers without first having a background check performed, but is also seeking to enact gun violence restraining order legislation and a mandate to force gun owners to lock up their firearms.

“Moms are in Olympia with a message: parents and concerned Washington citizens care about preventing gun violence in our state,” said Leah Bernstein, Washington Chapter Leader of Moms Demand Action, in a statement. “We’re here to urge our legislators to support a three-point plan to help prevent gun violence—and that includes blocking efforts to weaken I-594, Washington’s background check law that is already keeping guns out of the hands of dangerous people.”

On the subject of background checks, the state Senate Law and Justice Committee held hearings on a series of three bills to add a host of exemptions to the new law. These include Senate Bill 5615, which would allow members of the armed services to transfer guns between themselves, SB 5476, that would do the same for law enforcement, and SB 5579, which would allow security guards to use company-owned guns while on the job.

“Who would think that you would need to do a background check between two members of the armed forces transferring a weapon between the two of them?” said Sen. Don Benton, R-Vancouver, sponsor of one of the bills. “There’s no need for that, and it’s a waste of time and money.”

Second Amendment scholars warned of these sorts of pitfalls after the background check was voted in and confusion reigned over just what the new law mandated. For example, a small museum planned to pull a display of historical guns over questions about the legality of their transfers.

“The millions of dollars of I-594 advertising purchased by Bloomberg and his fellow plutocrats never informed that I-594 would crack down on museums, and on many other places where firearms are loaned for wholesome and constructive purposes,” Dave Kopel, an adjunct professor of advanced constitutional law at the University of Denver Sturm College of Law, told Guns.com at the time. “Instead of writing a law that was about private sales of firearms, Bloomberg wrote a law criminalizing simple loans of firearms – everything from letting your friend examine your new gun for five minutes, to loaning a historic firearm to a museum for a long time.”

Besides fending off challenges to Washington’s expanded background check law, the Moms are also throwing their support behind advancing legislation for “Extreme Risk Protection Orders” to allow 14-day firearm confiscations for those deemed at-risk. These orders, modeled after California’s controversial gun violence restraining order legislation enacted last year, allow those with knowledge of what they believe to be an at-risk individual to apply for the temporary removal of that person’s firearms.

According to a release from MDA, some 80 volunteers for the group presented 10,863 petitions to state legislators backing the measure.

“Extreme Risk Protective Orders legislation would ensure that those family members have a place to turn when they see red flags—allowing them to act on their concerns and, with documented evidence, petition a judge to temporarily restrict their loved one’s access to firearms,” said Leanne Kennedy, a local MDA volunteer.

Opponents to the similar California legislation termed that measure “a nightmare gun control bill,” and the “Turn in your neighbor bill,” claiming that they were overly flawed in concept and could even push those with mental health issues further into isolation.

Like 594, it is also the subject of reform legislation.

The third leg of the MDA agenda for the Evergreen State is to back companion bills, HB 1747 and SB 5789, that would mandate criminal charges for adults who leave unlocked firearms within ready access of a child if it is used in a shooting. Last summer the state Supreme Court dismissed the case of a Bremerton man charged with assault after his 9-year-old stepson accidentally shot a classmate in 2012.

The gun control group however is likely facing an uphill battle. Washington’s legislature is extremely partisan and almost perfectly divided. A Republican-leaning Coalition Caucus controls the state Senate while the Democrats hold a razor-thin 51-47 majority in the state House. This sort of mutually assured destruction has long stalled both pro and anti-gun measures alike in Olympia.

Second Amendment activists in the state voiced such a prediction in response to the new MDA push.

“Bloomberg’s front groups will not be happy until they eradicate the private ownership of all firearms,” Alan Gottlieb, chair of the Bellevue-based Citizens Committee for the Right to Keep and Bear Arms, told Guns.com. “Unlike Bloomberg buying the Washington State ballot measure 594, this time we will beat him.”