Newtown Panel: All guns should be registered, all ammo serial numbered 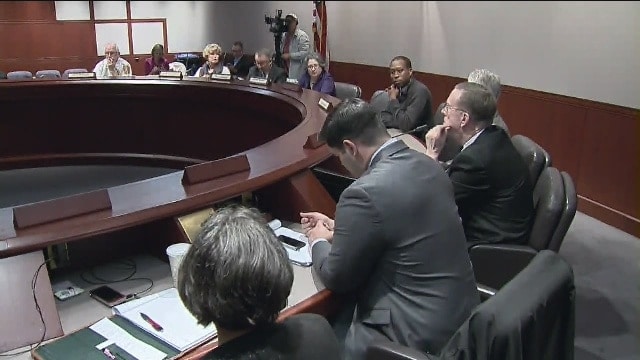 The 16-member Sandy Hook Advisory Commission is working on its final report of recommendations to the governor, which includes a number of extreme gun control measures. (Photo: WTNH)

A special commission set up by Connecticut Gov. Dannel P. Malloy after the Sandy Hook shooting may include a number of recommendations in its final report from registering all firearms, to tracking ammo, and screening owners.

The 16-member Sandy Hook Advisory Commission, established two years ago following the December 2012 Newtown incident in which 20 children and six adults were killed, will consider its final draft report Friday. The expansive 256-page document includes some 95 recommendations on mental health, the physical security of schools, and most controversially, guns.

“We’re balking at taking the next step, which is literally taking the guns out of the hands of bad people,” commission chair Hamden Mayor Scott Jackson told the CT Post.

Besides previous recommendations to prohibit both the sale and possession of any firearm capable of holding 10 rounds or more without the provision to grandfather guns, included in interim reports, the final draft calls for any shell casing for ammunition sold in the state have a serial number etched on it for tracing purposes.

Next, all firearms should be registered and ammunition buyers would be restricted to only the caliber chambered for their licensed guns. Those who have firearms licenses, stresses the report should at every renewal pass a test of firearms handling capacity as well as an understanding of state and local laws.

The editorial board of the CT Post published a piece praising the commission for its “courageous” recommendations, while admitting that some of the more controversial ones would have actually had little impact on the event that led to the panel’s creation.

“We support the concept of firearm registration, though that would not have prevented the deaths of 20 first-graders and six educators in Sandy Hook because the shooter used weapons legally bought and owned by his mother,” reads the op-ed.

In addition to registration, the report recommends that, “Any person seeking a license to sell, purchase or carry any type of firearm in the state should be required to pass a suitability screening process.” The process would not be limited to mental health diagnoses as noted by the panel as, “certain individuals are not suited to own, possess, or use firearms.”

Finally, the commission’s draft contains recommendations that judges should be given the power to order temporary confiscations of gun, ammunition and carry permits from a person who is the subject of a restraining order. That is where registration and bullet tracing would go hand in hand.

Members of Connecticut’s delegation to Congress to include Democrats Sen. Richard Blumenthal, Sen. Chris Murphy and Rep. Elizabeth Esty thanked the commission for its work and promised to assist with legislation.

“We will continue to fight for these commonsense measures that would deprive murderers of the key means of massacre, provide law enforcement the additional tools they have sought to enforce the laws on the books, strengthen school security, and fix our broken mental health system,” read a statement released by the lawmakers.

The final report is expected Feb. 14.