Opinion: Why anti-gun activists love to ask 'why' 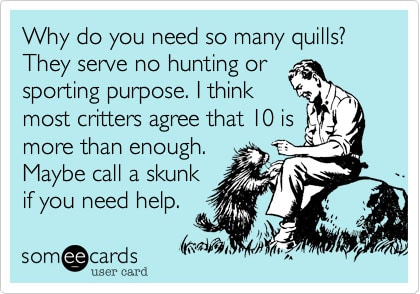 As a gun blogger and author of several firearms related books, I get a lot of questions from friends and family.  These folks don’t always share my views, and may disagree with my politics or ideals, or perhaps the value I place on the 2nd Amendment.  They typically ask the same sorts of questions, and I thought I’d address them below.

The most common question that always comes up is simply “Why?”  Why do you need “assault weapons”?  Why do you need a magazine that holds more than 10 rounds?  Why do you feel you should even own those dangerous guns?  The list goes on and on, but the overall tone and message is basically the same.

The problem is the question itself, because when you think about it, there really is no satisfactory answer one can give to the folks asking it.  If someone were to ask you “why” you think you need a car that goes above 65 mph (the speed limit here in CA) there really isn’t a good logical answer.  Driving faster than 65 is considered speeding, and it is also more dangerous than driving at slower speeds.  Furthermore, higher speeds mean more fuel which is bad for the environment in terms of how the gas was made and the emissions it is leaving behind.

Now you could make the argument that driving faster than 65 mph is necessary in an emergency, or something you should be able to do if it is on a private property like a racetrack.  Apply that logic to firearms and the liberal media would bring out the tar and feathers.

Guns are treated differently than just about any other object in society that is in common usage and could potential be deadly like swimming pools, aspirin, or alcohol.  Just think if alcohol was subject to the many of the same styles of laws handguns have here in California:

Why does anyone need to purchase than more than 750 ml of alcohol?  You should go by the approved list of hard alcohols available in CA.  Johnnie Walker black label is approved, but the green label has been submitted for testing.

You can only buy one 750ml bottle per month, and this is done to limit the straw purchase of alcohol which is often sold off to minors.  Similarly, 6 packs of beer have been deemed too dangerous and now the state would limit the sale of 12 ounce beer cans to exactly 5 cans.  Yes, you can purchase multiple 5 packs, but each cardboard container can only hold five cans or it will be considered a felony.

You’d like to purchase a flask for concealed drinking?  Well this requires a special permit from the state.  You’ll need to pay $200 to get your permit which lasts for two years.  You’ll also need to select an approved flask from a safety certified list of flasks which are all limited to approximately 4 ounces. All of that seems absurd when applied to booze, but bring up those regulations around guns, and the public thinks it will keep everyone safer.

Even if you respond with well thought out logical examples like cars or alcohol, the answer isn’t really satisfactory for the anti 2A person asking the question.  When people ask me this question, I want to answer back quickly “Because I can” and be done with it.  That answer is rude, but so is the question.

Truthfully the people asking don’t really want to know why; they are looking to get into a rhetoric fight.  They don’t really care what you have to say, and already have a few sound bites chambered and ready to go as soon as you stop talking.  These folks don’t really have an open mind, and nothing you say is going to change their mind.  If they keep pushing for verbal argument, don’t waste your time.

The following passage is from Dan Finkelstein’s latest book, California’s Gun Problem, and originally titled “For the Haters”.