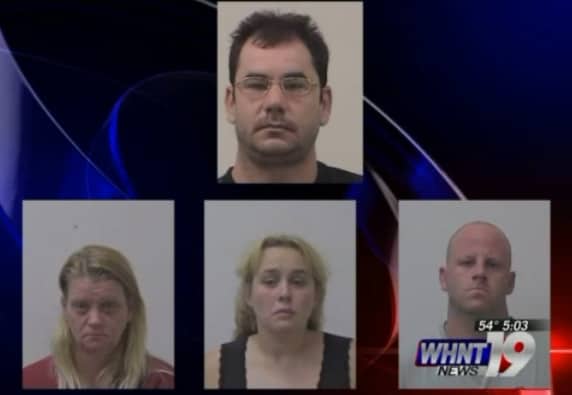 One suspect is dead and three others are facing a slew of charges, including murder, after a female homeowner fought back during a home invasion in Owens Cross Roads, Alabama, Monday night.

According to Sgt. Brian Chaffin of the Madison County Sheriff’s Office, the four suspects – Richard William Taylor, 42; Jeremy Floyd Jones, 29; Audra Lynn Anderson Ikard, 42; and Brandi Michelle Seagroves, 26 – knocked on the door of the home earlier in the day, asking to use the phone, but the homeowner refused to let them inside of her house.

Then, around 9:30 p.m., the four suspects returned to the home and forced their way inside, local media reported. However, the homeowner, whose name has not been released, was armed and opened fire on the suspects. Taylor was struck multiple times and died before officers arrived on the scene.

The remaining three suspects, none of whom were hit, immediately fled from the home once gunfire erupted, but were apprehended the following day.

All three suspects are now charged with robbery, burglary and criminal mischief, and are also charged with murder since Taylor was killed while the four were involved in the commission of a felony when his death occurred, authorities told reporters. They are all being held with a $135,000 bond. Jones faces an additional theft charge with an extra $2,500 bond, stemming from an earlier incident in which he allegedly knocked on a person’s door, asked to use their phone, then stole credits cards while inside the home.

The homeowner, who was home alone during the incident, was not believed to be physically harmed and is not expected to face any charges. Authorities confirmed that the homeowner and the suspects were previously acquainted, but did not elaborate on the relationship. Nonetheless, they said it appears she acted appropriately.

“At this time, we do feel that she was in fear for her life, and she did what she felt she needed to do to protect her life and her personal property,” Sgt. Chaffin said.

Chaffin warns against opening a door for an unknown person and said this kind of occurrence is becoming increasingly common.