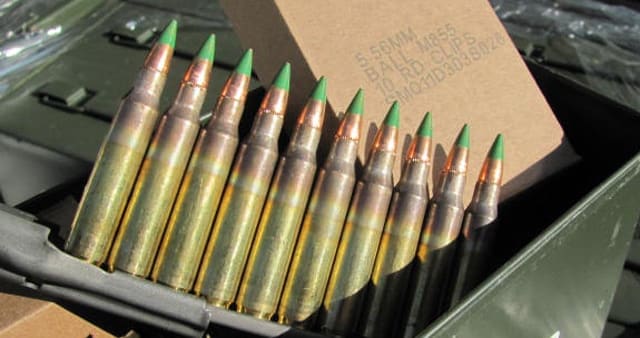 Federal regulators are considering revising the framework for determining if a particular type of ammo is used primarily for sporting purposes.

Prefacing a call for comments, the Bureau of Alcohol, Tobacco, Firearms and Explosives details the current framework for identifying armor piercing ammunition, with key components defined by Congress in the Law Enforcement Officers Protection Act of 1986 being ammo with no sporting purposes that can be fired out of a rifle and handgun.

“To ensure consistency, upon final implementation of the sporting purpose framework … ATF must withdraw the exemptions for 5.56 mm “green tip” ammunition, including both the SS109 and M855 cartridges,” the ATF says.

In 1986, the M855 ammo was exempt for sporting purposes, but standards, processes and firearm types changed in the past 29 years. For instance, the AR-15 — the M16 rifle’s civilian equivalent — is now available in a pistol configuration with nearly identical features and functionality.

In April, the ATF had a similar ruling with Russian surplus 7N6 5.45×39 type ammo. Upon discovering that an AK-pattern pistol was commercially available in the United States, the agency issued a ruling banning the import and sale of the ammo type. Based on its interpretation of LEOPA, the availability of the AK-pistol alters the ammo’s legal description.

The ATF says it recognizes that M855 is widely available to the public, so it soliciting comments “on how it can best implement withdrawal of this exemption while minimizing disruption to the ammunition and firearm industry and maximizing officer safety.”

The agency will consider all comments received by March 16. Submissions will be accepted three ways:

For more information, contact Denise Brown with the ATF’s Office of Regulatory Affairs at 202-648-7070.