The attorney said he simply forgot the gun was in his bag. (Photo: Cleveland.com)

David Malik, a well-known civil rights lawyer, was arrested Saturday afternoon after authorities discovered a handgun in his carry-on bag at a Cleveland airport, but the attorney said it was a simple mistake.

According to a statement by Malik, he had recently been target shooting with a concealed carry instructor when he apparently forgot to remove the gun from his bag. He then used the same bag to pack for the trip he had planned to take and inadvertently brought the .22-caliber handgun, along with ammo, to the airport. Authorities confirmed that the gun was unloaded.

Malik called it “a stupid mistake.”

Nonetheless, after spending the night in jail, Malik was released on bond Sunday and is scheduled to appear in court Tuesday morning, local media reports.

Steve Loomis, president of the Cleveland Police Patrolmen’s Association, pointed out the irony of the case.

“What’s interesting about David is he is such an anti-gun person,” Loomis said. “He’s such an anti-violence person, and of all the things for him to get arrested for, that really surprises me.”

Malik has had a number of cases against the city and local law enforcement, and has remained vocal about police brutality and the need for improvement in police departments.

For a short time, Malik represented the family of Tamir Rice, the 12-year-old boy who was fatally shot in November after police responded to a 911 call about the boy waving a gun around and pointing it at people. The gun turned out to be an airsoft pistol, and the boy’s family filed a lawsuit against the city and the officers involved in the deadly shooting. However, the family has since sought legal council from a different lawyer. 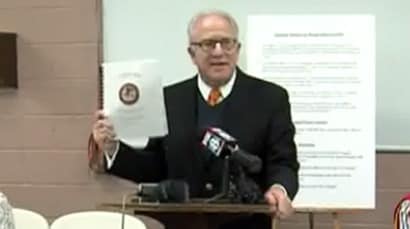 Malik is currently representing the family of Tanisha Anderson, who also died in November while in police custody. Anderson, who was being taken for a mental evaluation, died after an officer used a technique on her which involved him placing his knee on her back as she laid face down.

Previously, Malik had represented the family of Malissa Williams, who died in November 2012 when officers fired more than 100 rounds at her and Timothy Russell after they had led police on a chase which involved more than 60 police cars. Officers claimed that Russell tried to run them over and someone in the vehicle had shot at the police, but both families claimed neither Williams or Russell ever had a gun. The case ended with the city paying $3 million between the two families.