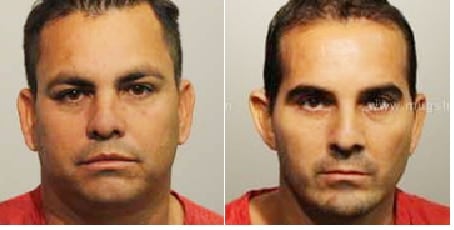 Two Colombians living in Florida were given a total of over 20 years in federal prison this week for smuggling arms to their native country that included “pistols that shoot .223 caliber armor-piercing rifle rounds.”

The news of the sentencing, released Feb. 13 by the Department of Justice, came the same day that the Bureau of Alcohol, Tobacco, Firearms and Explosives announced a potential revision for determining if a particular type of ammo is used primarily for sporting purposes, notably a popular type of 5.56mm ammunition — M855 cartridges equipped with SS109 bullets, with concern that the rounds could be used in pistols and thereby placing law enforcement officers at increased risk.

Convicted and sentenced were Rockland, Florida, residents Nelson Cartagena, 41, and Dairo Cartagena, 38, for their roles in unlawfully dealing firearms and smuggling those same arms to Colombia. According to a release from the ATF, the brothers between November 2013 and July 2014 bought guns and magazines from licensed dealers and through private transactions across Central Florida. The pair then smuggled these arms to contacts in Colombia, hidden in the motor housings of exercise equipment.

The intended end user was believed to be a drug cartel in that South American country.

When the investigation, handled by the U.S. Immigration and Customs Enforcement’s Homeland Security Investigations as well as the ATF, was sprung, some 88 firearms and 49 magazines were seized in both Colombia and Florida.

“The intercepted shipments included high-powered military style assault rifles, pistols that shoot .223 caliber armor-piercing rifle rounds, and a variety of 9 mm pistols. Based on evidence collected during the investigation, agents estimated that more than 100 firearms were purchased by the brothers and sent to Colombia during this conspiracy,” stated the release under the letterhead of U.S. Attorney A. Lee Bentley, III.

Bentley’s office won a previous case of gun smuggling into Colombia last summer when Mauricio Arbelaez, 42, plead guilty to shipping ammunition and firearms that were concealed in electronic gaming systems. Arbelaez was subsequently sentenced to more than five years.

Besides the brothers Cartagena – who pled guilty last fall – two other conspirators in the exercise machine gun running ring, Karen Chan and Julian Roland, are scheduled to be sentenced on March 5.