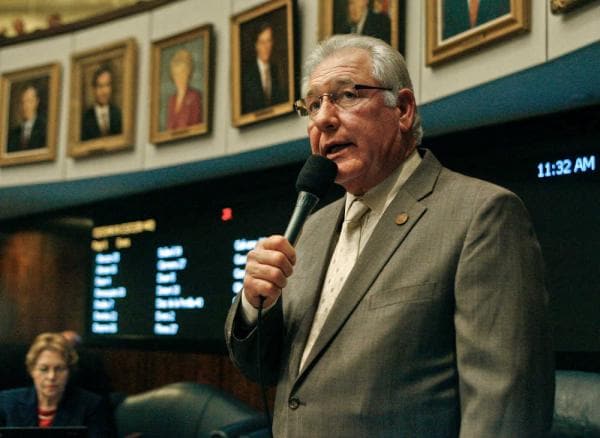 Florida Sen. Greg Evers, R-Okaloosa County, has shepherded a bill through committee to do away with gun free zones on the state’s university and college campuses. (Photo: St. Augustine Record)

A measure that would lift the longtime ban on lawful concealed carry on Florida’s college and university campuses edged out a narrow vote on party lines Monday and is advancing.

The legislation, a hot-button issue following a shooting at Florida State University last November, passed a 3-2 vote in the state Senate Criminal Justice Committee following much public testimony for and against.

“Those gun-free zones are just an incubator for folks that won’t follow the law, that actually bring guns into gun-free zones where the law-abiding citizens don’t have any guns,” Sen. Greg Evers, R-Okaloosa County, chair of the committee and sponsor of the bill told NBC2.

Evers’s measure, SB 176, aims to scrap language in the Sunshine State’s laws that deem public colleges and universities restricted areas for those who are lawfully carrying a concealed handgun. During the recent incident at FSU, one of the three victims shot by a gunman was a concealed carry permit supporter who couldn’t legally carry his gun on campus.

Similar bills have twice before been brought into the state legislature but never made it out of committee. Ironically, one of the lawmakers blamed for blocking a 2011 measure, then-Sen. John Thrasher, is the current FSU president.

Opponents to the measure voiced repeatedly during Monday’s public hearing that the issue of drugs and alcohol on campus were a deterrent to lifting the state-mandated gun free zones. This view was parroted in posts on social media from the gun control group Moms Demand Action made the same day.

One of the lawmakers who cast a vote against the measure, Sen. Audrey Gibson, D-Jacksonville, decried what she termed “mini-militias” that she feared the legislation could produce.

Students backing the measure feel that such claims border on the absurd.

“The fact is parties, be they at someone’s house or a venue, happen almost exclusively off campus, where concealed carry is already possible,” Erek Culbreath with Students for Concealed Carry at FSU told Guns.com of the issue.

“Yet we have seen no instances anywhere in the state of students using their concealed carry firearms in an illegal way as a result of these parties. If these lobbyists were right, we would see mayhem on a massive scale. These claims are absolutely absurd and insulting to law abiding students and members of the gun community,” Culbreath said.

According to an August 2014 study by the Crime Prevention Research Center, there have been no reported problems with permit holders in the nine states that mandate colleges allow permitted concealed handguns on campuses.

“Opponents of the bill keep saying there is so much drinking and drugs on campus that allowing licensed adults to carry firearms for protection will create a dangerous situation. That is an indictment on the university system,” Marion Hammer, president of the Unified Sportsmen of Florida and past president of the National Rifle Association, told Guns.com on Monday.

“That is a tacit admission that they are failing to enforce the law or protect our students on campus. Drugs and alcohol are not allowed on campus. Further, it is illegal for students under 21 to drink alcohol and drug use is illegal for all age groups. Anti-gun university personnel are using their failures to control alcohol abuse on campus as an excuse to oppose this bill and deny a constitutional right,” explained Hammer.

Senate Bill 173 has to clear three more committees before it is reaches the floor while a companion measure, HB 4005, is making its way through the House.