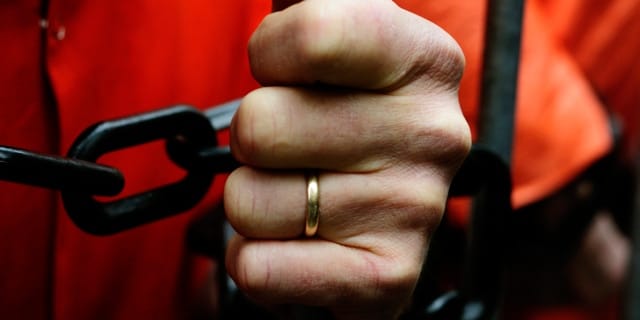 A man facing charges after a drunken crime spree in August was given the chance to wed the woman he loves before he was handed a 6 to 10-year sentence by the same judge who married the couple in a Cody, Wyoming, courtroom last week.

The ceremony wasn’t at all typical. In fact, 25-year-old Israel Silva, clad in an orange jumpsuit, wasn’t allowed to stand any closer than 15 feet to his bride, 19-year-old Ivy Koryne Smith.

“There will be no,`You can kiss the bride,’ or whatever they say when people get married,” said Silva’s defense attorney, Sarah Miles, before the ceremony.

Once District Judge Steven Cranfill finished the formalities of the wedding, which only took about a minute, everyone was ordered to sit back down and Silva was given his sentence.

Silva’s crime spree, which occurred while he was out of jail on bond, included two stolen – and crashed – pickup trucks and firing shots at officers while leading them on a high speed chase. Silva pleaded guilty to aggravated burglary, property destruction and driving under the influence of alcohol, but several other charges were dropped.

Silva now owes almost $46,000 in restitution for the damages he caused, but he’s fighting the monetary charges.