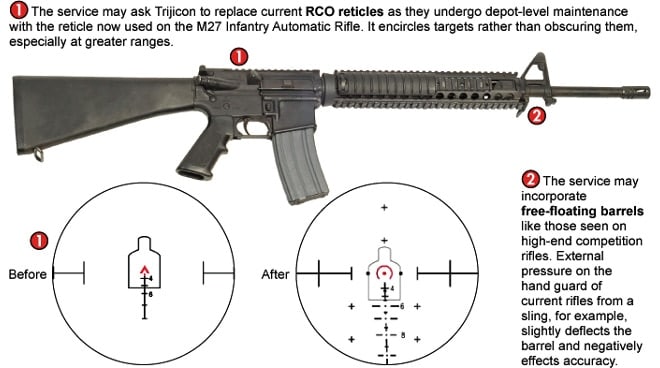 A new reticle is under consideration. (Photo: the Military Times)

The Marines are considering a few changes in the small arms department, focusing on tweaks to their rifles and ammo and for some, switching to Glock pistols for their sidearms.

Taking a cue from competition shooters, the Corps is looking for upgrades for their rifles. These upgrades are standard fare for any 3-gunner, including free-floating handguards, enhanced triggers, barrels and optics, and performance muzzle devices, but the Marines are also working to add improved controls for left-handed users and move towards improved ammunition.

The big news is that the Marine Corps Forces Special Operations Command, or MARSOC, is letting units carry Glock 19 pistols. The Model 19, Glock’s mid-size 9mm pistol, has been standard issue with military units and police departments around the world for decades.

MARSOC Marines commonly carry the standard Beretta M9A1 or the M45 MEUSOC, aka the Colt Close Quarters Battle Pistol, an off-the-shelf 1911 updated for 2012 to replace original M1911 pistols still in service with some units.

It would seem like that was a stop-gap solution today now that the Marines are giving Glock the green light with MARSOC personnel, although the Marines still have some decisions to make rolling out the newer pistol.

Time will tell if this is the first step in issuing the popular handgun on a larger scale. Much of the military is considering new sidearms, as the majority of 9mm, and even older .45 ACP pistols in service, are on their last legs.

This could be a quick fix between now and if and when the Army and Air Force selects a new gun for their Modular Handgun System. There are benefits to selecting the same sidearm that other branches of the military uses, but the Marines are going to have to wait to see what’s on the horizon as far as the MHS is concerned. 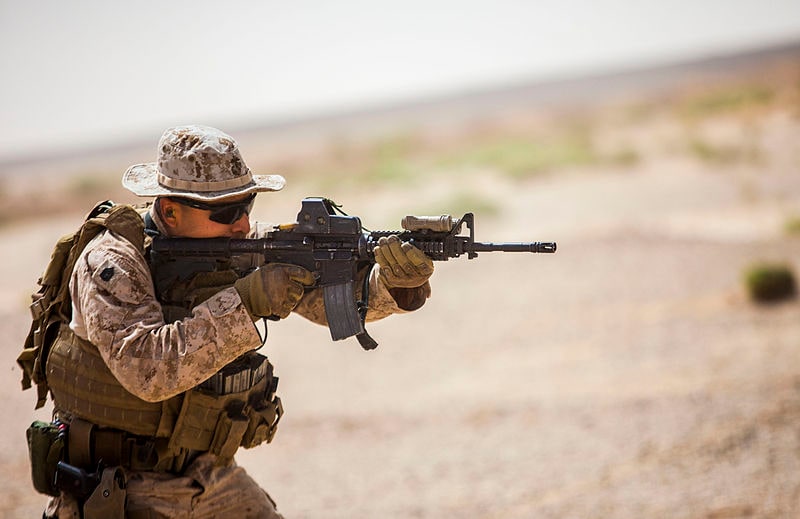 Rifle upgrades are likely to see less selective adoption. The Corps is looking at ways to improve all of their M16 rifles and M4 carbines. By tapping commercial channels they can replace existing components, like barrels and bolts, at a very low cost. By replacing a few crucial components, the Marines can effectively field all-new rifles.

Final decisions on rifle upgrades have not been made. It’s clear that the Marines are going to make changes to their rifles, but what changes, exactly, are still in the air.

For instance, some are calling for the use of compensators instead of flash hiders. “The best shooters in the world have comps. Why?” said Tom Layou, Chief Warrant Officer at Quantico, to the Military Times. “It is hardest to hit multiple and moving targets and compensators manage that recoil.”

But comps and brakes have trade-offs. They don’t eliminate muzzle flash which can give away a shooter’s position, particularly at night. Muzzle flash can also affect a shooter’s vision, especially in low-light conditions.

They also increase noise. This is especially important indoors, but also when shooting side-by-side. Most compensators channel muzzle blast sideways and anyone in that path will have to deal with the sonic concussion with every shot.

The standard A2 flash hider is widely regarded as one of the better flash hiders on the market, surpassed by only a few, like the 249F which was developed for machine guns. It may not do much for muzzle control but it does a great job at reducing visual signatures.

But selecting a free-floating handguard isn’t going to be easy. There are hundreds of options on the market and picking even just a few presents a challenge. On top of that, emerging accessory mounting standards like KeyMod and M-Lok will complicate selection. While it would be simple for the Marines to select a common Picatinny-railed handguard, these new systems are lighter weight and easier to handle.

The same challenges apply to selecting a new barrel profile and trigger. The consumer market heaps countless options onto buyers. Barrels are more than just profiles, they’re materials and finishes. The Marines may have some flexibility when it comes to picking something other than an M4 or M4A1 profile with a chrome-lined finish, which today is starting to look old-fashioned.

There’s a lot of work to be done when it comes to modernizing the Marines’ rifles and pistols, and many would argue that it’s overdue. Thankfully the work is now underway, and hopefully sooner rather than later, the Marines will be rocking new kit, with upgrades that can make a significant difference.