In a cruel twist of fate, however, it’s possible that some of the things you do in good conscience to train for an emergency could be putting your life (and those you might protect) at a greater risk than you might think.

There are several stories on record of shootings where citizens were involved in a gunfight, and after emptying a magazine, they stopped to pick up their spent brass casings, just as they had been taught at the range), resulting in legal nightmares from which many are surely still trying to wake up from. Habits can be good and bad, and they are definitely context-sensitive. What makes perfect sense at the range could get even get you killed in a real shootout if you begin tidying up your casings before fully clearing the scene of threats.

I’m not discouraging you from picking up spent brass at the range. But getting into the habit of doing it every time you empty a magazine is not a good habit to foster, out of context of the range. Repetition breeds habits. Habit takes over in times of extreme stress. Do the math.   You should never pick up your spent brass if you are involved in a self-defense shooting. If you do, you could find yourself accused of tampering with evidence, or corrupting evidence at the scene of a crime.

How many times have you heard the shooting axiom that most gunfights take place within seven yards? A lot, I’m betting.
The good news for shooters is that it’s a lot easier to hit something within 21 feet, than, say around 50 feet away, but if you look at real gunfights, most of them follow the same scenario – nothing happens for a while, then everything happens at once and that can be from anywhere and at basically any distance. 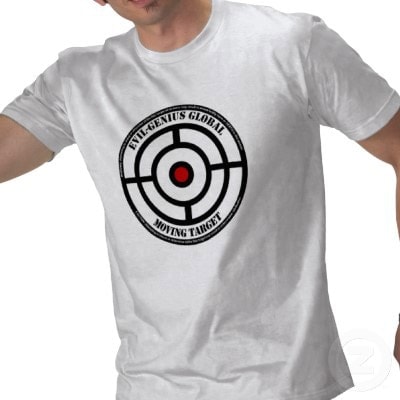 The thought that you’re going to have an armed confrontation with someone standing still in front of you at a preset distance is absurd (as the thought of picking off four or five bad guys while diving into a convenience store for cover like in the movies).  It’s actually far more likely that they’ll be shooting at you from a very short distance away but also be charging you from some off angle.  So while shooting small-to-mid-sized holes in a stationary paper target at a preset distance is great fun (and sometimes therapeutically good) it’s not going to be that useful, should you find yourself in a self-defense situation.

A better idea is to get involved with a local IDPA or IPSC group and practice shooting at moving targets or shooting while you move. A much better idea is to take classes at a range where they offer a “fun house” facility, where you can learn to shoot in real-world situations.

3.    Practicing at ranges that do not allow you to start your shot with a holstered gun

While I get that you really don’t want to be anywhere near some newbie that thinks practicing their quick-draw is a great idea on their first visit to a range, but not practicing drawing your weapon from your holster (especially if it is a concealed carry holster) means you’ll be totally unprepared should you have to use your weapon in real life.

I am not advocating breaking any range rules. They are there for reason. But if you’re not practicing drawing with a totally unloaded gun or rubber gun, you’re kidding yourself, if you think you know everything that can go wrong when drawing your gun.
Understand, the odds of you being in a situation where you would need to outdraw some assailant is infinitesimally small, but it does happen. More importantly, the ability to draw your weapon smoothly without interference from clothing, nervous fingers and Murphy’s law is crucial any time you draw your weapon.

Start slowly.  Rinse, lather, repeat. It is much more important, to get your gun unholstered without dropping it, shooting yourself in your foot, or forgetting to take the safety off and on target than it is to be fast.

I can’t tell you how many times I went to the range, loaded a magazine, put it in my gun, racked the slide to put one in the pipe, engaged the thumb safety, got focused, picked up the gun, drew a bead on the target, and…tried to shoot with the gun still on safety.
Now this is not a problem with some guns but since I’m a fan of the 1911, that thumb safety is something I’ll always have to worry with. The answer here is to practice picking up your gun and automatically disengaging the safety. Always. Every time.

This is one habit that can save your life: always press the safety off when you go to shoot. It follows then that your trigger finger is your safety of last resort. It doesn’t matter where the gun’s safeties are set – if you have control of your gun and your finger is off the trigger, you won’t be looking at an accidental discharge, negligent discharge, or accidental death/injury.

5.    Finished with that magazine?

One thing I hate about IDPA are the scenarios where they make you drop a magazine with ammo in it, just to load another one, though I do concede that practicing changing magazines is a great idea. You should do it, right along with practicing your ability to unholster/draw your weapon. I figure if you can eject a magazine, grab another one and get it seated in your gun – with your eyes closed, you’re probably in good shape.

Tell you what. Get a friend to stand 12 feet away from you. Put a pen in your back pocket. Now just stand there. Don’t move. Don’t give him any signal. When he thinks you’re sufficiently bored, have him come charging at you, one fist raised, as if he has a knife in his hand. See if you can get the pen out of your hip pocket and point it at him before he touches you. Go ahead, I’ll wait.

A lot more difficult than you might have thought, eh? Yep. Now imagine your friend is a knife- or gun-wielding assailant, and you’re trying to unholster the gun you have concealed under your shirt, in that nice, new $80 IWB holster. The point here is you need to train for the Art of the Possible. If someone is seven feet away from you, you will not have time to bring your gun to bear. Just not gonna happen. You’d best include some self-defense moves into your training, or odds are, you’re going to end up a statistic.

Not really. But you might think that’s so given the way ranges are configured.

Most ranges I’ve visited are set up to control rounds fired at a reinforced steel backstop with a target height between 5’5” and 6” or thereabouts. If you wanted to, say shoot from a standing position at an assailant who’s on the ground, or if you’re short and need to practice shooting at someone much taller than you, you’re usually going to find yourself outta luck if you go to your friendly, neighborhood range.

Don’t think this is important?  Consider this: you’re on a street and some thugs are approaching you. Are you going to get your weapon and stand in the middle of the street, hoping you’re a better shot than they are, or are you going to find some cover, and crouch down behind it, making yourself as small a target as you can? Yeah. Me too.

So training whilst standing is fine. But if you’re not training while crouched down behind something that represents a car, a couch, or a desk means you’re probably not going to be ready if the dice comes up snake eyes. Just sayin.’

The bottom line? Nobody can predict the future. All you can do is to make educated guesses, play the odds, and pray for a little luck, should things go south in a hurry. There is no way to train for every possible scenario. But if your training is ingraining habits that could work against you in a shootout, you might want to rethink them.