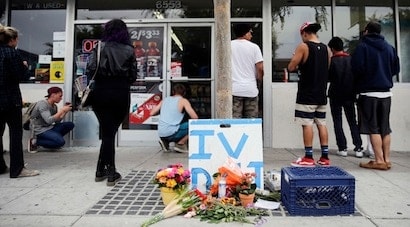 Some flowers are left in front of IV Deli Mart, where part of Friday night’s mass shooting took place by a drive-by shooter, on Saturday, May 24, 2014, in Isla Vista, Calif. Alan Shifman, a lawyer who represents Hollywood director Peter Rodger, says the family believes Rodger’s son, Elliot Rodger, was the lone gunman who went on the shooting rampage near the University of California at Santa Barbara. (Photo: Associated Press)

Santa Barbara authorities released a report Thursday with new details about the vicious killing spree carried out by a college student in Isla Vista last May.

“The suspect’s in-depth research included information about Joseph Goebbels and Heinrich Himmler, two infamous members of the Nazi hierarchy,” the report said. “In actuality, the suspect made specific mention of planning the rampage on a much earlier date, during the annual Deltopia event, but decided against it due to the increased police presence in Isla Vista.”

Also among the search entries were those involving knives, including “Quick silent kill with a knife,” “How to kill someone with a knife,” and searches for knife attacks at two train stations in China.

Guns.com asked the Santa Barbara County Sheriff’s Office if there was a link between the train station queries and the fact that one of Rodger’s roommates was of Chinese decent and has not received a response.

The 68-page report runs through the events that led up to Rodger, 22, killing six people, including his three college roommates, who he brutally stabbed with a nine-inch “Boar Hunter” knife and a six-inch Cold Steel “SRK” blade before fatally shooting two of three female students near a sorority house adjacent to the University of California, Santa Barbara campus. The third victim was a college student, killed when Rodger fired on a convenience store from his black 2008 BMW 328i sedan – from which he also fired on and wounded 20 other people.

During the 10-minute rampage, Rodger was armed with three handguns – a Glock and two SIG Sauers – and 400 rounds of ammunition when the student exchanged fire with deputies before shooting himself dead, Guns.com reported immediately following the incident.

Also confirmed was police suspicion that Rodger acted alone in the commission of his crimes, which included six counts of murder, three counts of murder under special circumstances – lying in wait – 20 counts of attempted murder and multiple lesser offenses, according to the report.

Following the killings, the California state legislature passed a law – AB 1014 – allowing authorities to temporarily confiscate guns from individuals deemed  by their family to be a mental health risk. Fearing some would take advantage of the law, Assemblymember Melissa Melendez, R-Lake Elsinore, introduced a bill – sent to committee Tuesday – making it a felony to file false reports.