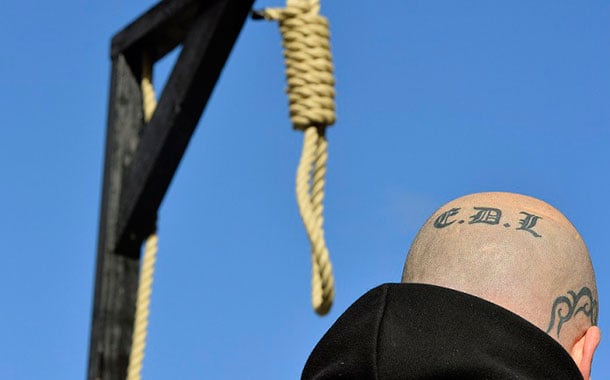 Nooses have become a fixture at protests across Europe. (photo: ibtimes)

Europe clings to its ropes and traditions, insisting all the while that people, not ropes, cause the deaths. It’s not a rope problem they maintain, but a mental health problem. They argue, until blue in the face, that rope is part of a long and rich tradition where grandfathers, fathers, sons, proudly own and use rope.

“Our family has always had rope, different thicknesses, different lengths, different materials even. It’s part of who we are here.” Nigel Cockswain is proudly British but thinks that ropes are an important part of tradition across the rest of Europe too. “My wife and I were in Lithuania recently and they have more rope than anyone else, you know. They are very serious about their rope. It was good to know that despite the many differences between a Brit and an Eastern European, we do have rope in common.”

Indeed, across Europe, the citizens of the EU and beyond take their rope with equal seriousness. It’s been part of the culture throughout its history, and even prior, but it wasn’t really until the last 30 or so years that its resurgence has reminded Europeans of their shared history and culture. Regardless from which European country one hails, rope is an important part of that country’s traditions.

But rope has come to the center of an expanding argument lately over just how much rope one should be allowed to own in a modern culture. Some argue that nobody really needs more than about a two-foot length of rope. Others argue that any length of rope is dangerous and that a modern Europe has no use for such a dangerous menace.

We Americans take rope for granted, of course, but it is right now one of the biggest threats to the lives of young European males. Recent talk about limiting rope length has become a hot-button issue on both sides of the debate.

Katarina Van Hoeven is a young Dutch woman obsessed with ridding her country of rope, one of the nation’s earliest proponents of stricter rope control. “Who needs more than two feet of rope? And why?” she inquires, her questions clearly rhetorical. “I can understand maybe if you are a professional cave explorer or deck hand on a boat, but any more than two feet of length for your average citizen, well, that’s excessive. It’s dangerous. It’s inviting death, if you ask me. What else is rope good for but more people dying?”

Robert Pichaud bristles at the very suggestion. “That kind of talk is absurd, obviously. Rope doesn’t kill people, knots do,” says Robert (“the ‘t’ is silent of course,” he reminds us), “what we need to do is to make knots illegal. Basic knots are fine, but the more complex knots taught to sailors and soldiers, they need to be illegal. Advanced knot use is directly correlated to rope death. If we made knots illegal, the only people who would want to own rope…” He drops his thought as though he has made his point.

Robert with the “silent t” is among a growing group of Europeans who support rope rights but also recognize that there needs to be a little “common sense from both sides.” His group, much like Anders Nielsen’s Danish group G.U.N.S (Get Us No Slipknots–it loses something in the translation), works to ensure that French citizens understand their rights as rope owners. He and his acolytes are intent on educating every French man and woman on the importance of responsible rope ownership.

“I understand that government cannot solve every problem. But lives can be saved. Our job is to show the French people that they can own rope without resorting to knot use. He points to his daughters’ jump ropes as an example. “I cannot take the jump rope from my daughters, I can only teach them to use it safely.”

Robert’s message is lost among the louder voices of other camps, though, like that organized around the ideas of Germany’s Alexander Bilheim.

Bilheim believes that rope is a “scourge” and the “source of the greatest threat to our country’s young people.” Bilheim is working toward the total and complete abolition of rope and what he derisively refers to as, “the myth of rope rights.”

“Cultures change. We are no longer a sailing culture. We don’t farm. We just don’t need or use rope the way we used to. In the modern age, rope is good for one thing and one thing only, death. 30,000 deaths per year, at least.” Bilheim wants all rope in Europe illegal. Some, however, argue that it is unrealistic to rid an entire society and culture of all of its rope.

“There is already so much rope in Europe that it’s too late,” says Juan Altidore, a Barcelona native intent on combating what he sees as rope-misinformation. “It can never happen. The only reality is that we must teach people about rope safety and, at the larger level, emphasize better mental health initiatives.”

Altidore sees Europe’s rope problem as a northern European problem, but one that worries him nonetheless. “Listen,” he leans in quietly to emphasize his point, “life is more stressful up there and the rope takes on a different meaning. Down here in the south of Europe, it’s different. For me, my rope is just a rope, it cannot form a noose on its own and strangle me.

To die from a rope, one must tie the noose or knot and then act in a way counter to intuition. That suggests that such a person is not mentally healthy. But nobody wants to talk about mental health. We just blame the rope, or the length, or the style of knot.”

Altidore responds with a chuckle, “Well, this is where we disagree, obviously. This is why we can never make progress. I think that mental illness leads to suicide risk. David believes pointing that out somehow stigmatizes the mentally ill. This is why we can never have a dialogue…we are too far apart on the basics. The fact is that if we get rid of one method of death, it is guaranteed that another will surely take its place.”

Gallegos throws his hands in the air, exasperated with his fellow Spaniard, frustrated that they disagree on so basic a point. “Every time someone hangs, people are quick to call them crazy. If a man does not have a gun, he finds the rope. We don’t allow guns. Why rope?”

“This is what I’m up against,” Atidore answers, waving his hands back at Gallegos, “you don’t even know that controlling guns won’t change people killing themselves or each other, but you use it as an example anyway.”

The two men quickly escalate their disagreement in Spanish, perfectly illustrating the frustration spreading across their continent. They become, in their gesticulating fervent debate, the perfect example of why so many fear that the argument will go on forever without solution.