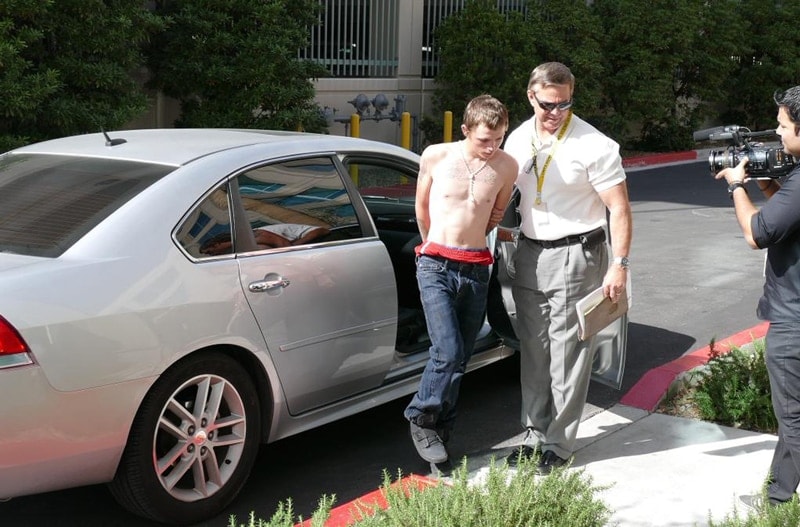 The suspect wanted in a Las Vegas road rage incident last week that turned into a fatal shootout was taken into custody just after noon Thursday following a two-hour standoff with the police, but authorities said they are still searching for a second suspect.

The victim’s family also revealed that they were acquainted with the suspect – a fact not previously known, local media reported.

The deadly incident occurred on Feb. 13 while Tammy Meyers was giving her teen daughter driving lessons in the parking lot of a nearby school. Although there are conflicting reports about the details of what led up to the shooting, it is known that the two were driving in their car when another vehicle, occupied by the suspect, sped past them. The daughter apparently honked the horn at the speeding car, which prompted the driver of the other car to stop and confront Meyers and her daughter. There was a verbal exchange between the suspect and Meyers and her daughter, and Meyers revealed that whatever was said was enough to leave her feeling scared.

Meyers then drove home, dropped off her daughter and got her 22-year-old son, Brandon. Tammy instructed her son to get his legally owned 9mm handgun, and the two went to look for the suspect, who was later identified as 19-year-old Erich Nowsch, Jr. Initially, Tammy and Brandon found the vehicle driven by Nowsch and followed him for a time, but soon lost the vehicle.

Tammy and Brandon then returned to their home, but while the mother and son were still outside, Nowsch drove up and opened fire. Brandon returned fire, but apparently Tammy was the only one who was struck. She was shot in the head. Authorities believe she was struck by the bullets from Nowsch’s gun, not Brandon’s.

Tammy was rushed to the hospital, where she died the following day – Valentine’s Day.

Kathleen Nowsch, the suspect’s mother, apparently tipped police off on Thursday that Eric could be found at her home, only a block from the Meyer’s home. Law enforcement, including SWAT, surrounding the house for about two hours before taking Eric into custody. During the standoff, Tammy’s husband, Robert, who was obviously distraught, showed up at the home, calling Eric an “animal.”

Eric now faces charges for murder, attempted murder and discharging a gun within a vehicle.

After Eric’s arrest, Robert Meyers revealed that not only did the family know Eric, but that his wife had spent countless hours “consoling” the boy.

“She fed him, she gave him money, she told him to pull his pants up and be a man,” Robert said.

Las Vegas police Capt. Chris Tomaino said that there is still a lot of investigative work to be done in the case, and that they are still searching for a second suspect. However, he also revealed that they do not believe the second suspect fired any shots during the deadly incident.