So, you want to bury your guns?

From full-on, doomsday preppers to simple gun-owners who fear impending gun control (read, confiscation) by the U.S. government, Guns.com has seen quite a spike recently in inquiries on how to stash a few firearms underground. So, what should one consider before building a “hillbilly cache”?

A few years back, a shooter friend of mine from Canada told me about the fear he and his father felt towards Canadian gun control legislation. In the course of our conversation, he admitted that his dad had buried a bunch of guns “out by the family well”. I was glad he told me. We were friends and he trusted that I wouldn’t tell a single soul, which I didn’t. Well, until now.

The decision to cache your weapons is a very personal decision and my friend is only okay with me sharing his story with a couple hundred thousand interested readers today because, well, because of none of your business. But I tell his story here because it helps illustrate a greater point: a secret is a secret until it isn’t.

If you ever plan on burying your survival treasure, you do well to remember the old adage, “loose lips, sink ships.” If you tell just two really good friends, expect them to tell at least two of their most trusted friends and don’t be too surprised when you find a stranger telling you about a bunch of guns buried in the west corner lot of your grand-daddy’s apple orchard. Also realize that if the story of your guns is being told, inevitably someone listening will suggest finding them.

It should also go without saying that the place you chose needs to be discrete. You are going to get spotted burying your guns in the in the middle of the concrete jungle like say downtown Chicago so pick a place that’s private, without the potential for a ton of foot traffic (or construction work).

After keeping other people from knowing where your stash is buried, the second most important thing you need to address when you bury your guns is making sure you’ll still be able to find them when it counts. A nuclear blast or an epic natural disaster could level trees and man-made structures, so it’s important to be able to find the exact location of your dig without relying on these temporary features. Rather chose a prominent, natural landmark—a place that won’t erode, move or disappear—and navigate your stash spot from there. Although writing this location down step-by-step does have its advantages, it’s best to memorize this location.

Alternate solutions exist, specifically the use of electronic locators or other devices to keep track of your guns’ location. Though convenient, realize that relying on this equipment carries its own concerns. Aside from the potential for mechanical failure, you may also have to contend with power outages, battery life and the feasibility of long-term storage if you rely solely on this method. Finally, understand that if you can see or read your guns location remotely, others have the ability to do so as well.

Lastly, whatever you bury (gold, guns, ammo etc.), plan on having it there for a long – very long – time. Though it may be macabre to think about it, you may be dead before it even comes time to dig these weapons back up so chose your stash guns wisely. Chose guns that you are prepared to say goodbye to but also be fairly reliable (i.e. not the cheapest pistol you can find).

Metal and moisture can’t mix in long-term storage scenarios and one major thing to contend with when burying your gun is that the two are going to be neighbors for a long time. The ground holds rainwater and your gun (even your new polymer Glock) has metal components. Any metal that is wet will rust and rusting like this can lock solid your assembly’s mechanical pieces, taking the gun out of commission.

To combat this, I suggest a two-phase plan of attack: first, protect the gun itself from moisture, then find a suitable, relatively airtight container for the weapon. 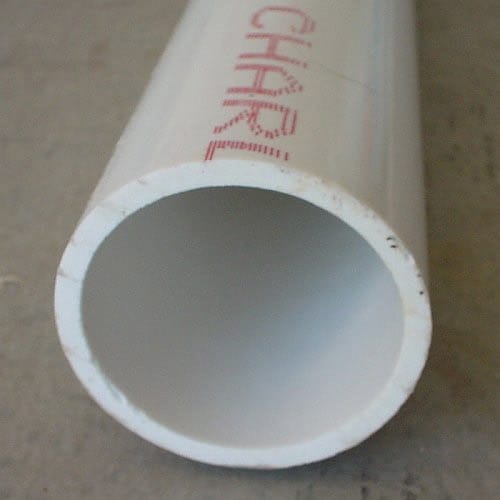 8-10″ PVC pipe can be used to make custom fit capsules to bury your guns underground.

Painting your pieces with cosmoline rust preventives is a good first step here, but you definitely need to clean and dry your guns and then lather them with gun packing grease. You should put it on pretty thick because, as mentioned above, you really don’t know when this gun is going to be unearthed and the grease will dry up over time. Axle or high temperature bearing grease could work too, I suppose.

Whatever you use, it should be something you can clean off with an alcohol or acetone base liquid like gasoline or thinner. Remember to keep something like it in your emergency tool kit, just in case.

Moving on to the vessel, an eight or 10-inch PVC pipe usually does the trick. PVC pipe won’t serve as a rust conduit like other tubing or piping will and you can cut pieces to accommodate long guns or handguns. A couple of caps or a threaded plug can be used on either side and you can tighten these up further by sealing any gaps with silicone caulk.

It’s not a bad idea to wrap the guns first in wax butcher paper before placing them in the pipe, but whatever you do, make sure not to use plastic. Plastic sweats meaning condensates, which leads to rust.

Buy mil-spec factory ammo—you’ll know it’s sealed by the red dye around the primer. Though not ideal, a little moisture won’t hurt it, really, so there’s no need to do anything more to your ammo than box it up good. However, cold temperatures are horrible on ammo—it messes up the powder inside the casing and will result in low-pressures. To avoid this, you’ll need to go below the frost line when you dig your hole. Depending on what part of the country that is, about four feet should suffice (no worries, metal detectors won’t usually detect down that far).

Also, don’t forget extra magazines and little lube (not grease) to keep them nice. Again, don’t wrap anything in plastic.