Vermont background check bill sputtering in the face of backlash 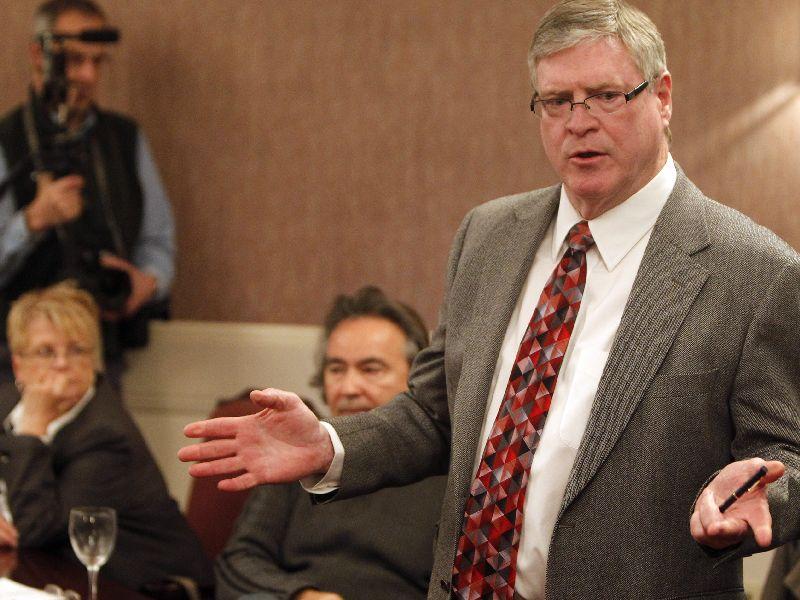 Vermont Senate President John Campbell is likely to drop the expanded background check requirements from his gun control bill to get it through committee this week. (Photo: Toby Talbot/AP)

With gun rights groups coming out in force against a measure to expand background checks to almost all firearms transfers, the sponsor of the legislation is set to restructure the issue.

However, Campbell is now considering dropping the key background check portions of the bill while keeping two minor provisions included in the legislation intact.

“I always knew that the first part was going to be a little difficult — the background checks — but (in) these other two areas, I think there’s sufficient evidence to show how useful it can be and how this can and will save lives,” Campbell said in an interview Friday with VNews. “It’s a priority of mine and I would be extremely disappointed if it doesn’t get through in this session.”

The two sections in Campbell’s bill, S.31, that may remain intact would be one to allow state prosecutors to enforce federal gun possession laws, and another that would report the state’s mental health orders that would prohibit gun possession to the National Instant Criminal Background Check System that is utilized by federal firearms license holders to perform checks prior to processing a gun transfer.

The bill faces the Senate Judiciary Committee this week where its Democratic chair, Sen. Dick Sears, stated publicly that the measure could be dead on arrival if it contains the expanded background check requirements.

“I don’t believe that the background check portion of the bill has the votes in this committee to pass out of this committee,” Sears said last week.

The call for expanded background checks at the state level has become in recent months the calling card of gun control organizations.

In 2014, Washington state held a historic up or down ballot initiative that passed by nine points to mandate an 18-page measure to greatly expand checks in that Pacific Northwest state. Former New York Mayor Michael Bloomberg’s Everytown for Gun Safety group funded the lengthy campaign in large part. Following the Washington win, Everytown moved on to Nevada while promising to recycle the same model in other states.

In January, Everytown released a study in which it contends the decrease in number of background check denials in the Vermont by the NICS system since 1998 means that more criminals and otherwise prohibited firearms possessors are buying guns through private transactions.

The group has been heavily involved in stumping for the issue in Vermont that has included a controversial sting into online gun sales released last month that claimed 1 in 24 online gun buyers were prohibited from possessing guns.

Meanwhile, gun rights groups have been joined by law enforcement associations to voice their opposition to expanded checks in a state that has some of the lowest crime rates in the nation.

Vermont S.31 is on the agenda for committee discussion Tuesday morning.