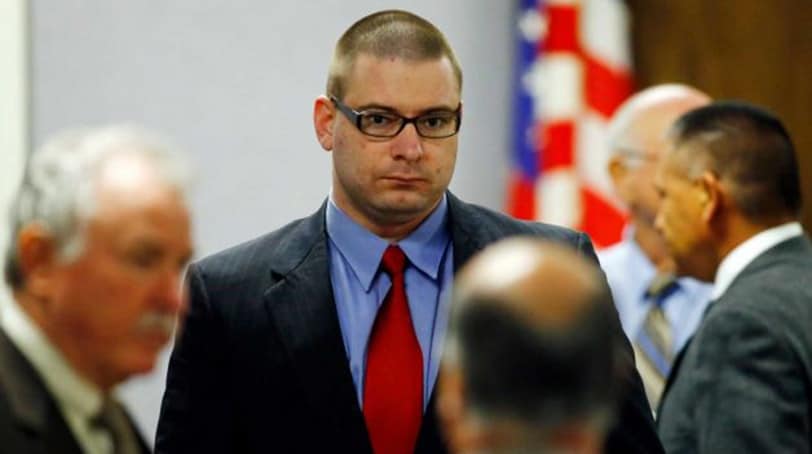 The murders were bloody and senseless, according to one testimony, and after nine days of proceedings, the former Marine who admitted to the killing of famed Navy SEAL Chris Kyle – subject of the blockbuster film “American Sniper” – and fellow veteran Chad Littlefield was found guilty of capital murder Tuesday evening.

Routh was sentenced to life without parole.

The jury, made up of 10 women and two men, spent almost four hours deliberating before coming to the unanimous decision.

Eddie Ray Routh, 27, never took the stand in his trial held at the Erath County District Court in Stephenville, Texas, but the jury heard testimony from family, friends and experts.

On the final day of the capital murder trial, Howard Ryan, an expert crime scene analyst, testified about the trajectory of the bullets that mortally struck Kyle and Littlefield on Feb. 2, 2013 and jurors were shown photos of the dead veterans.

“When gunfire erupts, people move. The only time you don’t see it is when it happens quickly and decisively,” Ryan testified, as reported by The Empire-Tribune. “The first thing that came to mind with Mr. Kyle was that he absolutely never saw this coming.”

Ryan said that Kyle had no way of defending himself and that his gunshot wounds were found on the right side of his body, while Littlefield had two bullets enter his back and exit his chest; one strike his spinal column; one enter the back of his head and one his face.

As a form of therapy, Kyle often took vets struggling with PTSD to the Rough Creek Lodge – located some 25 miles southeast of Stephenville and 70 miles southwest of Fort Worth – where he helped design the shooting range. That day, Kyle was fulfilling a promise to Routh’s mother that he would try and help the former Marine who struggled with dependence on drugs and alcohol.

Routh’s sessions of intoxication often landed him in jail or in the Department of Veterans Affairs hospital, where he’d been treated several times for psychosis.

After gunning down Kyle and Littlefield, Routh fled in Kyle’s truck. Routh visited his sister before leading police on a high-speed chase.