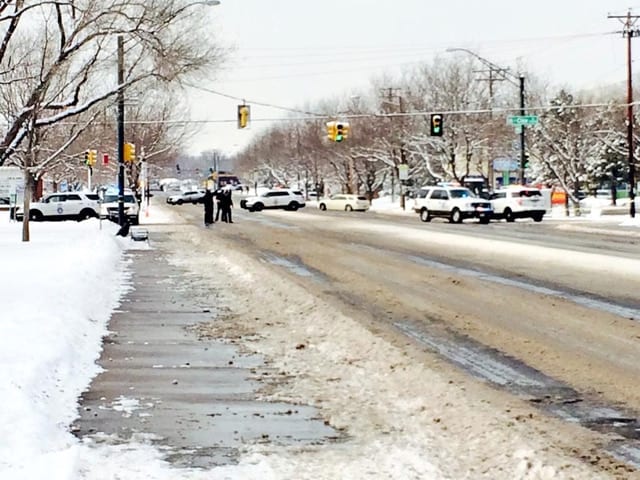 The incident resulted in several roads being blocked off for nearly an hour. (Photo: ABC)

A man is facing felony charges after he entered a Denver Police Department Monday morning armed with a gun.

According to reports from a local ABC affiliate, the suspect, later identified as 33-year-old Daniel Lawrence Ruiz, drove his SUV onto the front lawn of the police department at about 11:20 a.m., before he entered the building. Several civilians were inside the building at the time, but were immediately evacuated, according to Raquel Lopez with the Denver Police Department.

Because of the location of the man’s vehicle and authorities initially not knowing Ruiz’s intentions, the bomb squad was called in to examine the vehicle. After about 45 minutes, the bomb squad determined that Ruiz’s SUV did not contain an explosive device.

The incident also prompted the evacuation of several nearby businesses and the lock-down of a neighborhood school.

For reasons which are unknown at this time, authorities also searched a nearby business.

A man who works in a building across the street from the police station, who only wanted to be identified as Tony, told reporters that although he didn’t see Ruiz drive up onto the lawn, he saw police, with rifles drawn, come out of the building immediately afterwards. Tony said he was afraid that a shootout might occur, but no shots were fired during the incident. In fact, Lopez confirmed that Ruiz was taken into custody without further incident, and no one was injured during the ordeal.

Authorities have not released many details about the incident and it’s unknown if, although he was armed, Ruiz actually made any threats when he entered the building. Ruiz’s father did reveal that his son had recently had a falling out with his girlfriend and he was staying on his father’s property near the police station.