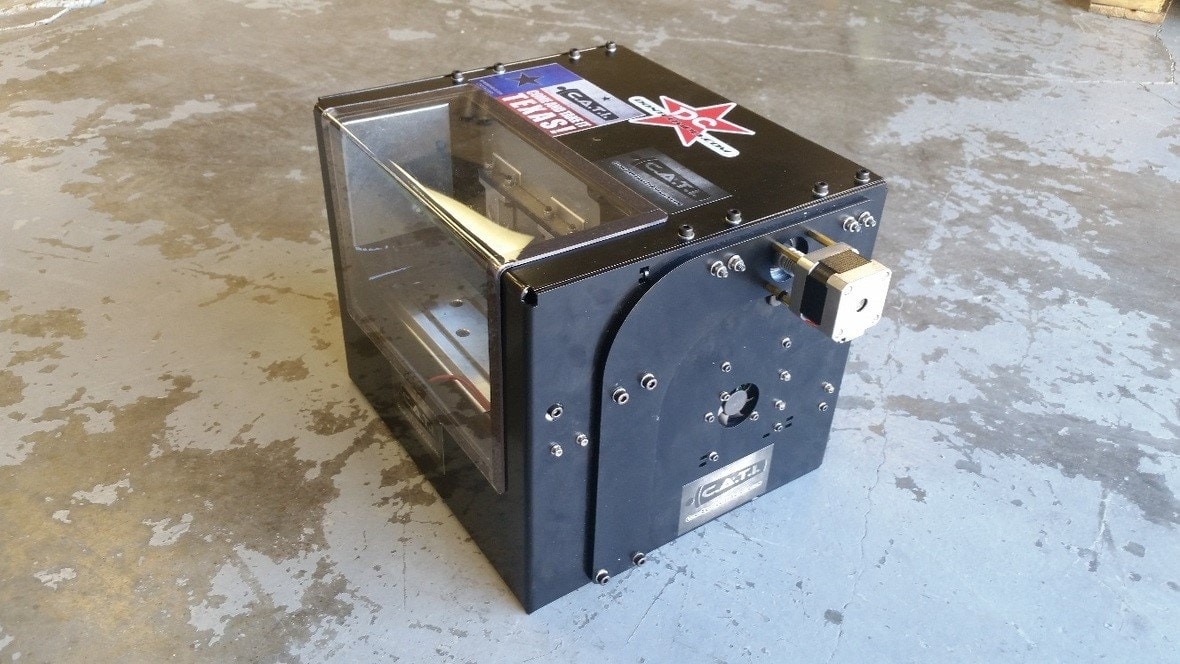 FedEx, for now at least, finds the Ghost Gunner device more dangerous than guns or radioactive materials. (Photo by DefDist)

The inventor of the 3D printed firearm, Cody Wilson, is looking for another shipper for his Ghost Gunner CNC machine as FedEx has backed off over concerns that it may not comply with the law.

Wilson’s device, a desktop $1,000 mill that is capable of turning 80 percent lower blanks into functional AR-15 lower receivers in about an hour, was used by Second Amendment advocates on the steps of the Texas Capitol successfully last month. Now, ready to fulfil orders for the machine, Wilson was told by FedEx to shop for another shipping outlet.

“In February, I began pursuing business-to-consumer fulfillment rates from Federal Express to ship my product because I was a member of their FedEx Advantage/NRA Business Alliance program,” Wilson told Guns.com in an email. “I understood that the company held itself out as catering to the firearms industry with special rates.”

However, Wilson did not expect what came next.

“Two weeks ago FedEx, through my account executive, began demurring on the rates and expressing uncertainty as to the legal status of my product. I assured them there was no controversy and showed them legal memos from my GCA [U.S. Gun Control Act of 1968] firm in DC and other memos and facts confirming that the product and its related activity are not regulated or restricted by the ATF or federal law,” he said.

That didn’t stop the shipper from refusing this week to ship the Ghost Gunner for Wilson’s company, Defense Distributed, a non-profit organized by the former law student to expand Second Amendment practices.

“This device is capable of manufacturing firearms, and potentially by private individuals,” FedEx spokesman Scott Fiedler told Wired on Tuesday. “We are uncertain at this time whether this device is a regulated commodity by local, state, or federal governments. As such, to ensure we comply with the applicable law and regulations, FedEx declined to ship this device until we know more about how it will be regulated.”

It’s not that FedEx refuses to ship hazardous materials, CNC machinery or weapons.

In fact the carrier does elect to transport firearms, parts kits and gun accessories as evidenced both by the company’s policy page and listings on the pages of popular new and surplus firearms distributors and parts dealers who use their service. Moreover, the shipper, as Wilson noted, is listed in the National Rifle Association’s Business Alliance program offering discounted services to members.

Companies that sell radioactive isotopes for scientific purposes even list FedEx as a carrier for economy shipping options.

Wilson is not losing sleep over the issue but remains committed to the, “constitutionally protected right to make a rifle free from government surveillance.”

The inventor, who made headlines in 2013 when he created the first 3D-printed handgun, the single-shot Liberator, which was later the subject of a State Department crackdown, is a self-proclaimed anarchist.

Wilson has long pushed to decentralize the manufacture of once traditionally produced, government-regulated goods, including firearms and has moved recently into “dark web” technology such as a Bitcoin anonymizer project as well as plans to run for the Bitcoin Foundation board – so he could destroy it.

The activist advised he anticipates finding a shipper eventually.

“FedEx is free to do business with whomever they please, but we can see in this decision still more of the contours of a corporate collusion with the regime’s domestic political efforts to disrupt the acquisition of the battle rifle,” Wilson told Guns.com

Update 3:20 EST: Cody Wilson advised Guns.com that UPS is also now refusing to ship the Ghost Gunner CNC mill. He nonetheless remains adamant in getting them into the hands of those who want them.